The HUB project at Columbia and Albert Streets in Waterloo, Ontario, was unique in allowing us the opportunity to design not only the buildings on the site and their relationship to the existing urban context, but also to create our own urban space in the interstitial space within the site itself.

The client required a design scheme that would maximize residential density, provide commercial space at the ground floor, and create pedestrian-focused urban/landscape space for the tenants.

In order to meet the program requirements, we created a masterplan concept that includes five buildings around the perimeter of the site with an accessible public promenade that cuts through the centre of the project and creates pockets of programmable event space. We accommodated the bulk of the density along the north side of the property with five, fourteen-storey towers. An eight-storey tower fronts Columbia Street to the south. 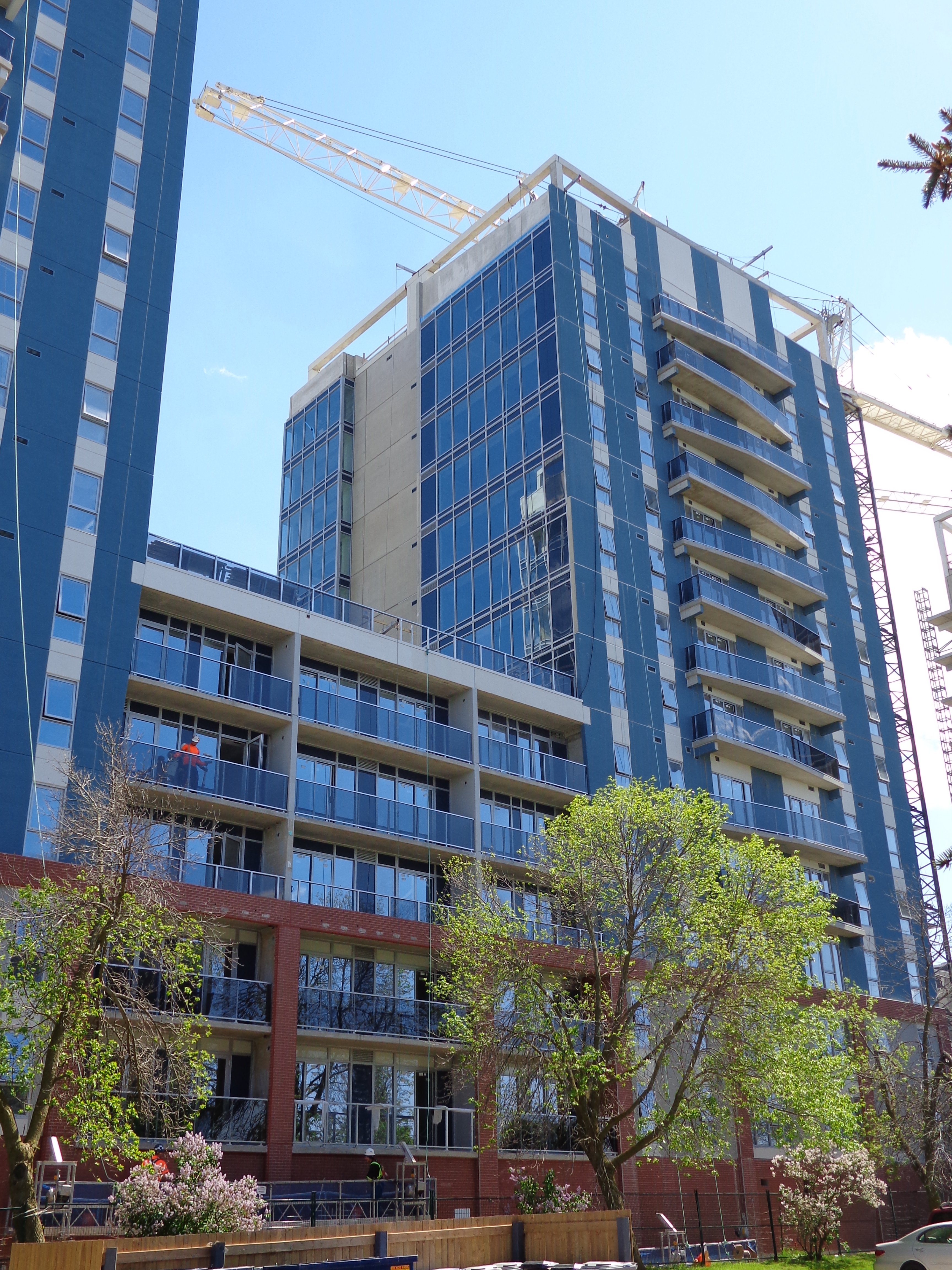 Gateways into the site were designed at both Albert and Columbia Streets, creating a promenade link between these streets for pedestrian connections, and being used as a fire route and limited service access. Above grade parking is limited to the west property line along an existing right of way, while the remainder of the parking is in an underground parking structure that covers the majority of the site. The design concept uses the above programming and planning principles to create a central Hub within the community: a pedestrian-focused promenade, reminiscent of European city design, which can host seasonal events and is bordered by the buildings, with commercial shops at ground level, and completed with historically-themed art installations referencing Waterloo’s cultural and historical roots. The architectural design was developed through a dialectic between the historical, the contemporary, and the future; an architectural synthesis of past-present-future. 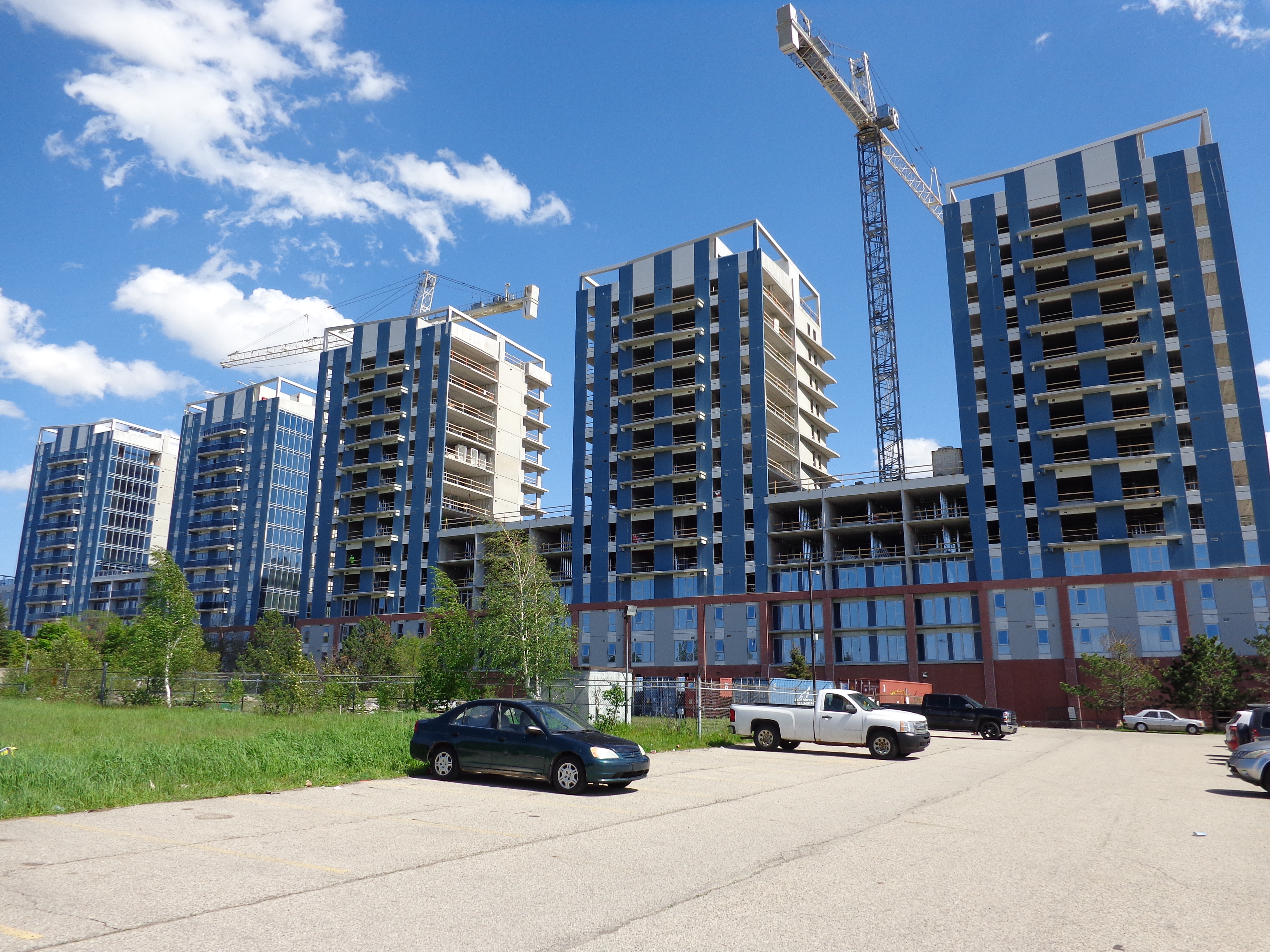 The podiums anchor the structures and relate to the existing human scale and fabric surrounding the site. They leverage the versatility of precast concrete formliners to mimic brickwork, relating again to the human scale. Lastly, the precast concrete towers rise out of the podiums, clad in metal and glass and taking on their own form and language, and serve as beacons for the HUB development, as well as the future of the community as a whole.

Alexander Chouinard, M.Arch, OAA, is an architect at PG Design Studio in Waterloo.

The buildings are designed and built as a total precast concrete structure using shear walls for the lateral stability system. Roof and floors use prestressed 203 millimetre [8 inches] and 254 millimetre [10 inches] thick hollowcore panels depending on loading. Some of the details include:
- Welded connections were used for vertical joints to transfer shear forces between wall panels.
- Threaded splicer bars and grout tube connections were used for horizontal joints between wall panels to resist overturning moments and in-plane shear forces.
- Exterior decorative precast concrete bands were bolted to the supporting building structure.
- Building load-bearing walls are supported at the promenade level using prestressed precast concrete beams.
- Expansion joints were introduced at the promenade level to relieve thermal/movement stresses at the drive aisle concrete topping.
- Flat raft foundations are used under each building. Connection plates were cast into the footings and rebar welded to plates to match wall panel grout tube locations. Threaded rods were cast into the footing for the connection of column base plates. 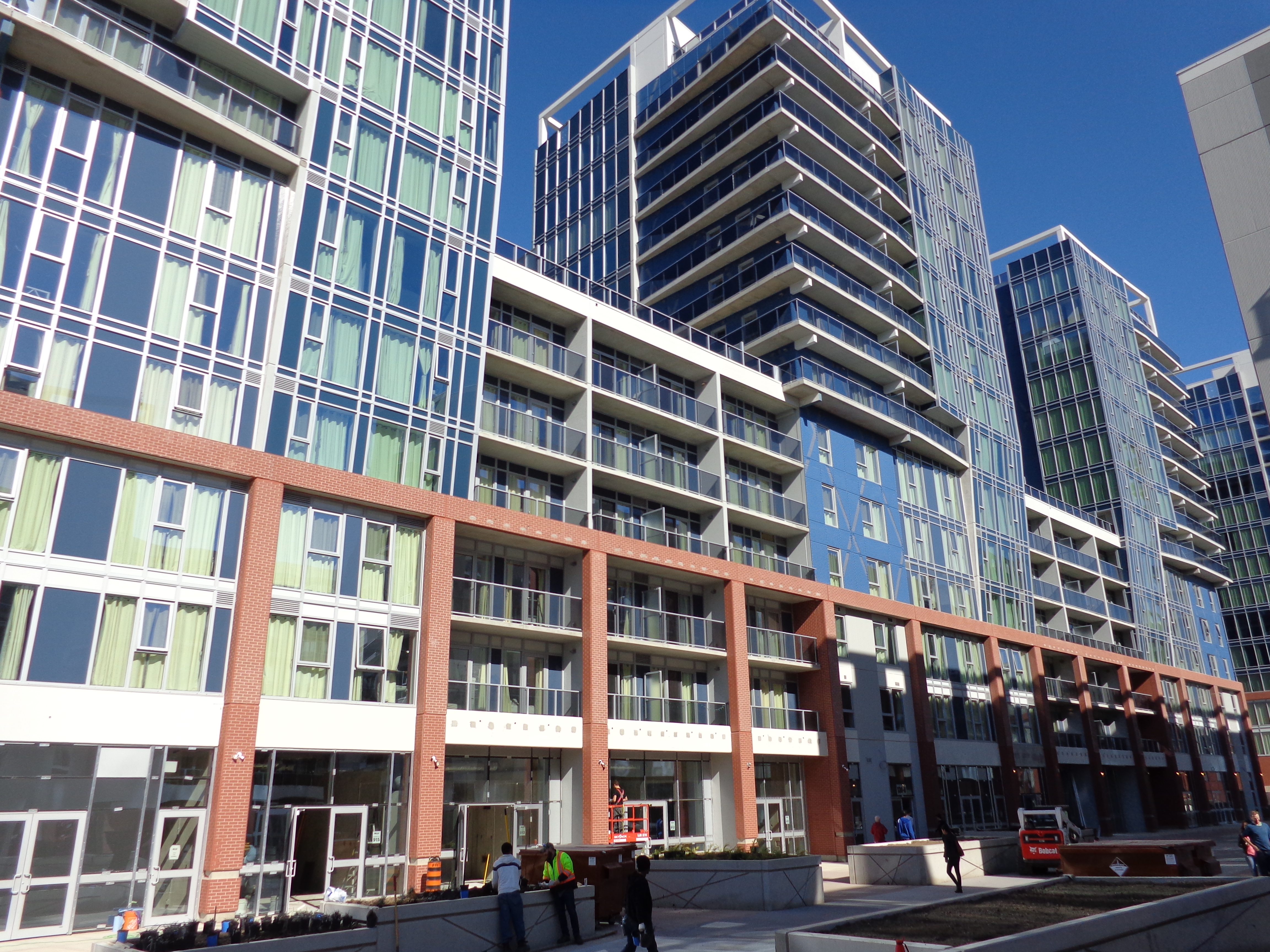 BUILDING THE TOWERS
By Frans VandenHeuvel

The five precast concrete buildings range from 6 to 14 storeys, all connected with a below-grade 9,500 square metre [100,000 square feet] parking garage. Two of the buildings consist of six-storey podiums which then split into two or three towers extending to 14 storeys. The buildings contain commercial units at the promenade level and a total of 603 one- to three- bedroom residential units ranging from 40 to 87 square metres [444 to 937 square feet]. The target market is students and young professionals so the exterior finishes had to be distinctive from the adjacent surrounding buildings. The urban look was completed using a precast concrete superstructure with curtainwalls at street level, and window walls on the upper storeys. 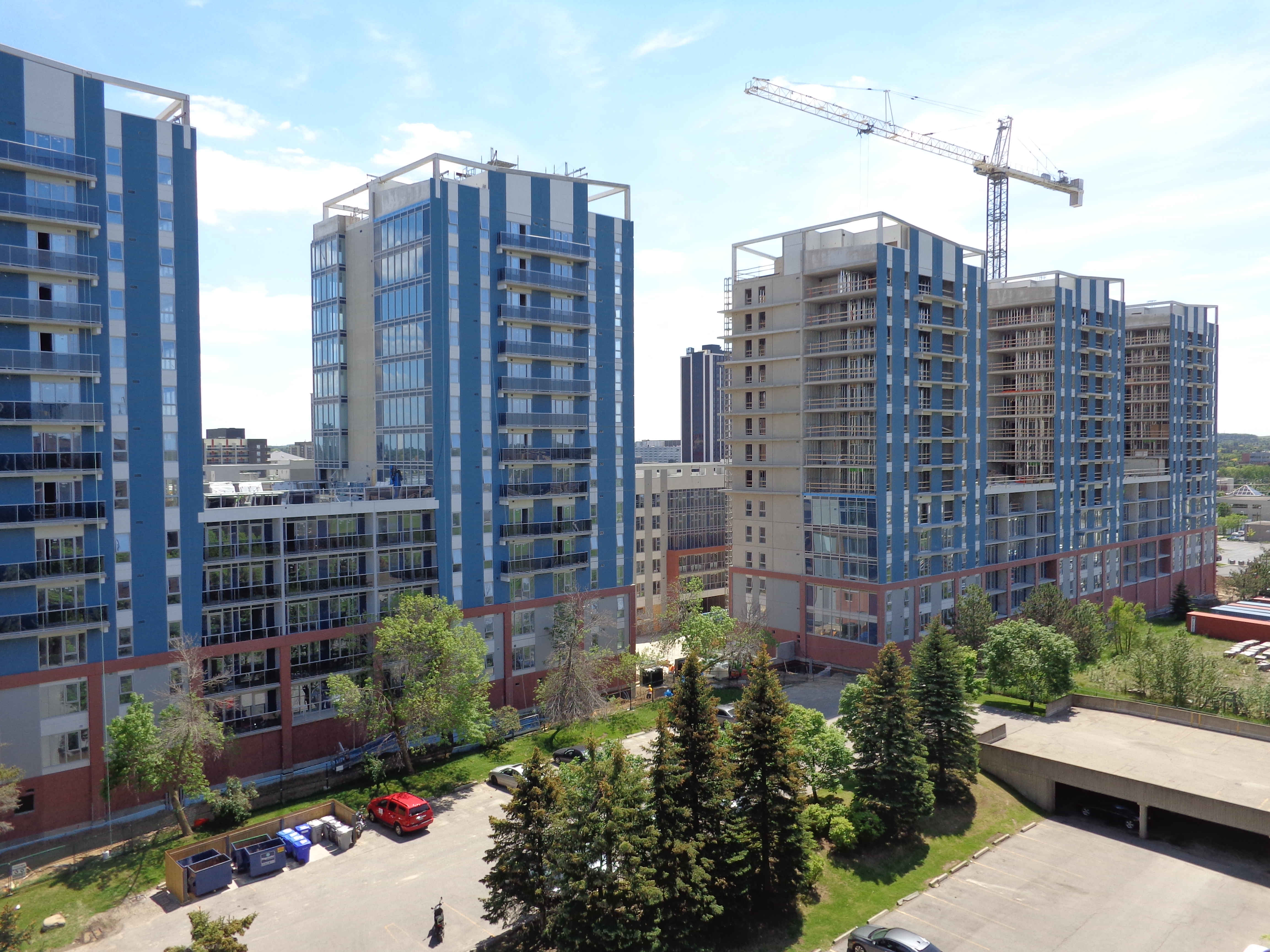 A unique feature is the balcony support system which consists of cantilevered arms that are cast as part of the interior shear walls to provide an unobstructed view from the balconies. Precast installation was completed over a 10-month period, starting in July, 2016 and finishing in April, 2017.

One crew started with a mobile crane, working across the parking garage. As their work was completed, four tower cranes were erected for the construction of the buildings.
With three work crews and given the repetitiveness of the layout and connection details, Stubbe’s Precast was able to complete the floors of 780 square metres [8,400 square feet] and walls of 400 square metres [4,300 square feet] of one level of a tower in three days. As the precast installation progressed, the interior rough-in trades followed closely behind to complete the layouts and have the building fully insulated.
As soon as the roof was completed and the building was closed in, the drywall and finishing trades followed to complete the buildings for occupancy. Total precast concrete construction was the optimal solution for this project due to the tight schedule needed to accommodate the fall influx of student rentals. 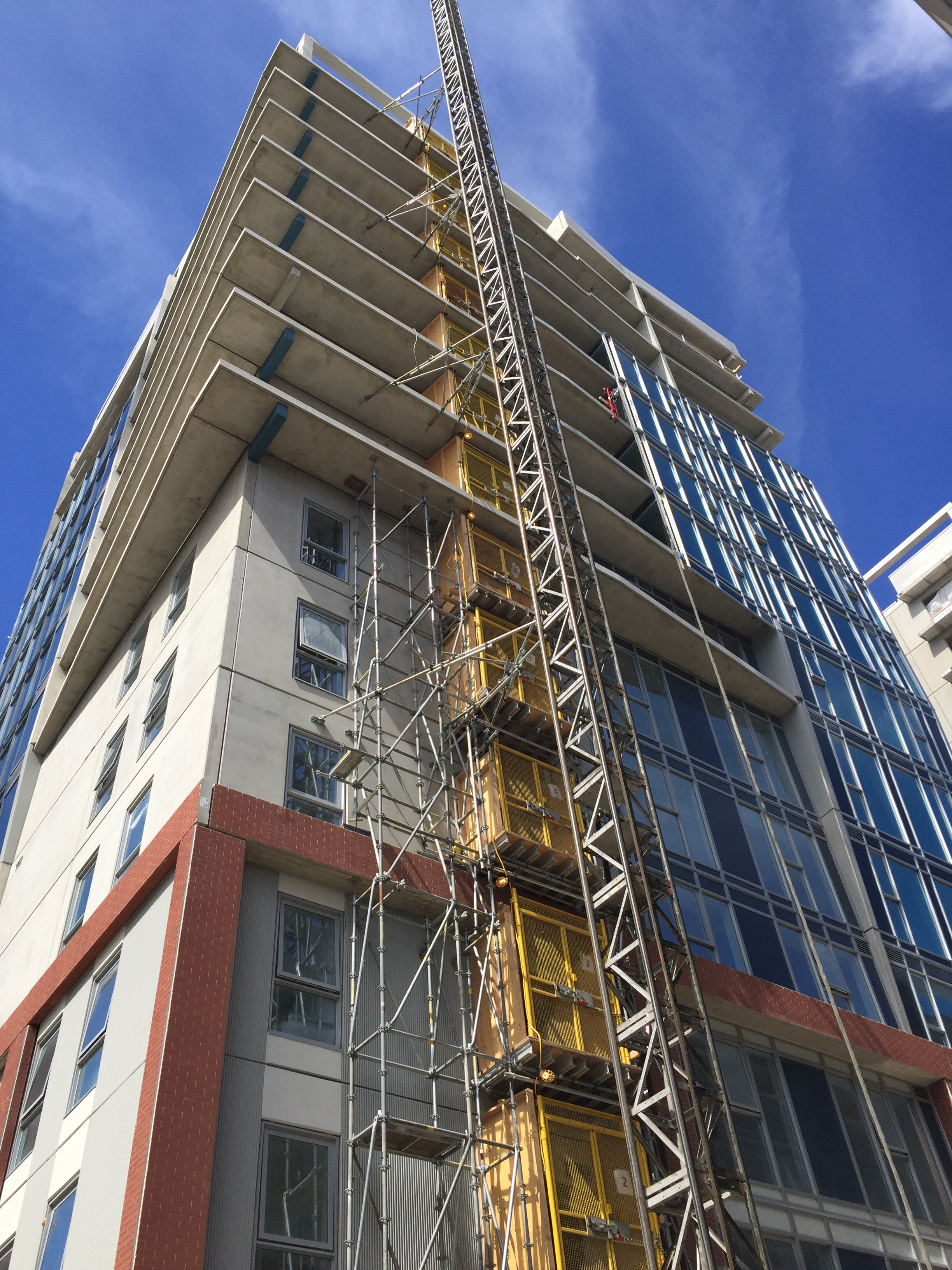 Frans VandenHeuvel is with Stubbe’s Precast.