Located next to the Bell Centre in downtown Montreal, the new La tour des Canadiens soars to 167 metres [548 feet] making it the seventh tallest building in the city. Partly owned by the Montreal Canadiens, the tower of 50 floors consists of 553 condos with 9 floors of parking. 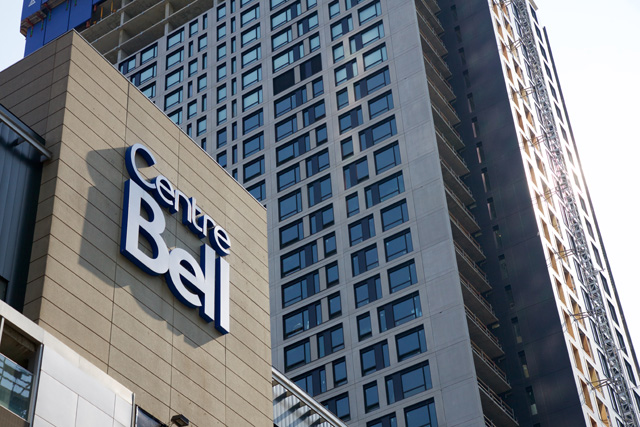 The building was initially designed to be another glass tower. However, by bringing new ideas and articulation to the facade, and to reduce cost, we were able to convince both the owners and design team to use precast concrete as a cladding and benefit from its aesthetics, speed of erection and reliable quality of prefabrication. 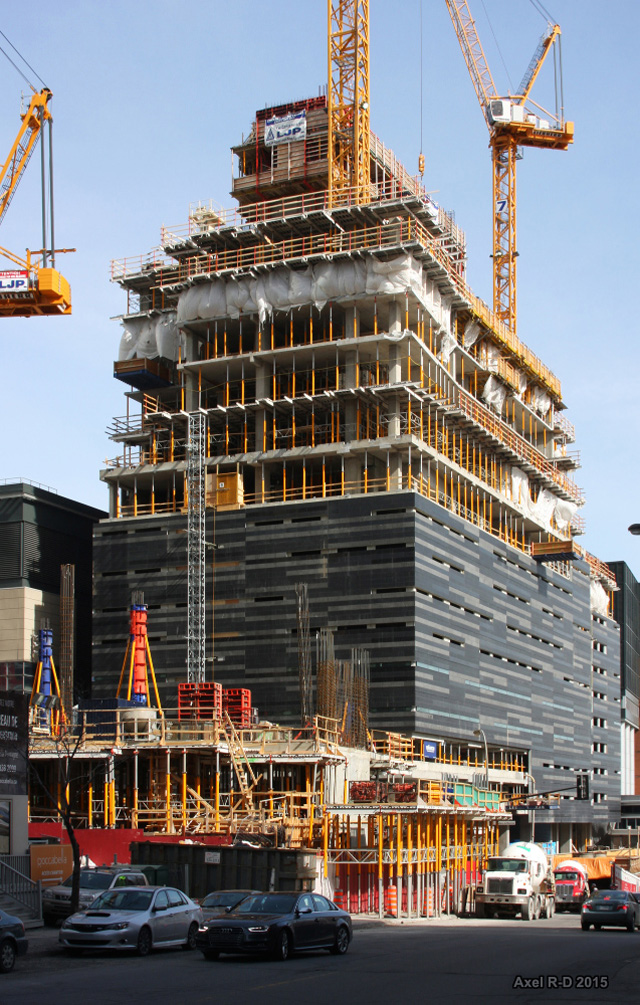 By making large precast concrete panels, we were able to create a facade with horizontal and vertical lines, thus preserving the original design organized around the verticality of the facade.

Approximately 1,190 precast concrete panels were produced, some with granite finish, specially selected by the owners. Some panels are double wythe insulated wall panels, used at the parking level, and consisting of insulation between two layers of concrete, for a total thickness of 28 centimetres [11 inches]. For the residential section, we used a system of conventional single wythe precast concrete cladding panels, interior steel studs, spray insulation and drywall. 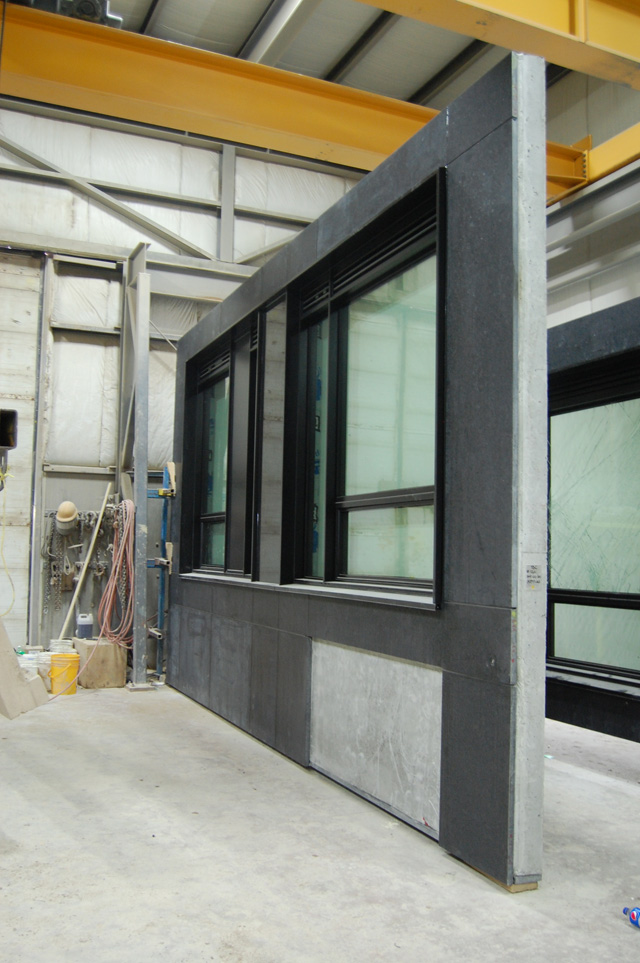 We adopted a system of six typical precast concrete panels which were mixed and matched to create the desired visual effect. The panel types differed mainly by the placement and size of window openings. The openings were "punched openings" and the windows were installed at the precast plant under the guidance of Groupe Lessard, a leader in designing and manufacturing intelligent building envelope systems. This step ensured higher quality control and faster installation on site, which was especially critical in the dense urban area of this project. 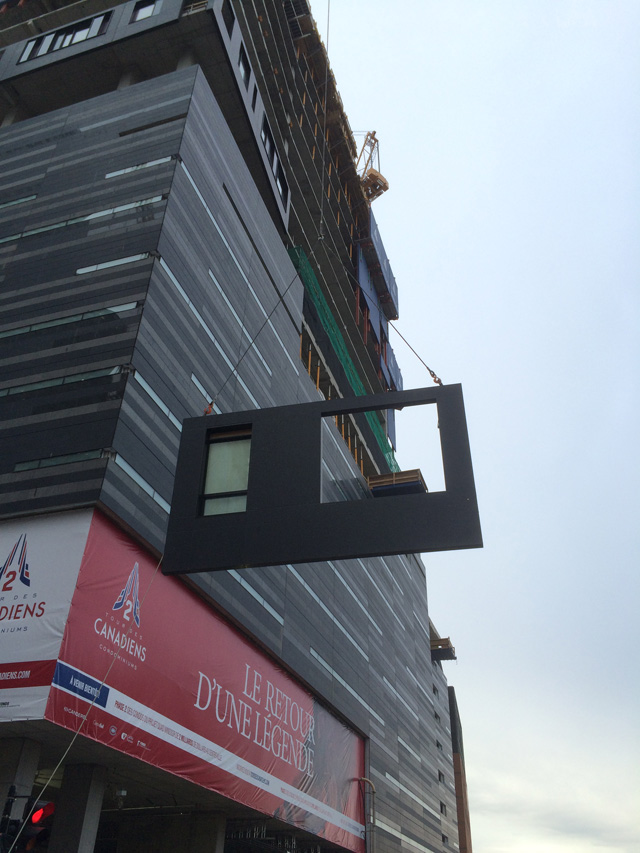 Production started in September 2014 and finished in September 2015. Quality represented an important factor for the selection of the technology, but so did the erection speed. The precast concrete supplier, BPDL erected an average of eight panels per day, starting in February 2015. In order to speed-up the erection, all anchors were designed to allow a maximum of productivity in the field. All anchors were hot-dipped galvanized – a service provided at the precast facility. 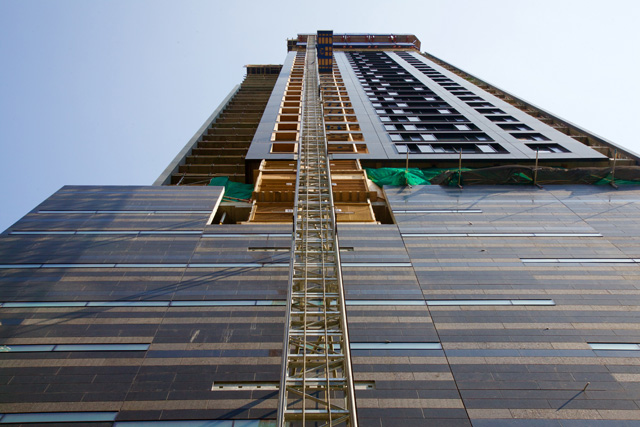 The pattern effect of the exterior precast concrete is created by the six typcial panel system described earlier, but also by using a pattern of black granite finishing and twotone dark grey sandblasted finishes which, together, give visual articulation to the facade. The black granite applied to the precast concrete panels gives a high-quality finish and was used in the most public areas of the podium and in the penthouses. The lower floors used the sandblasted limestone grey finish which lowered the total construction cost. Construction of the tower occured faster than we expected. 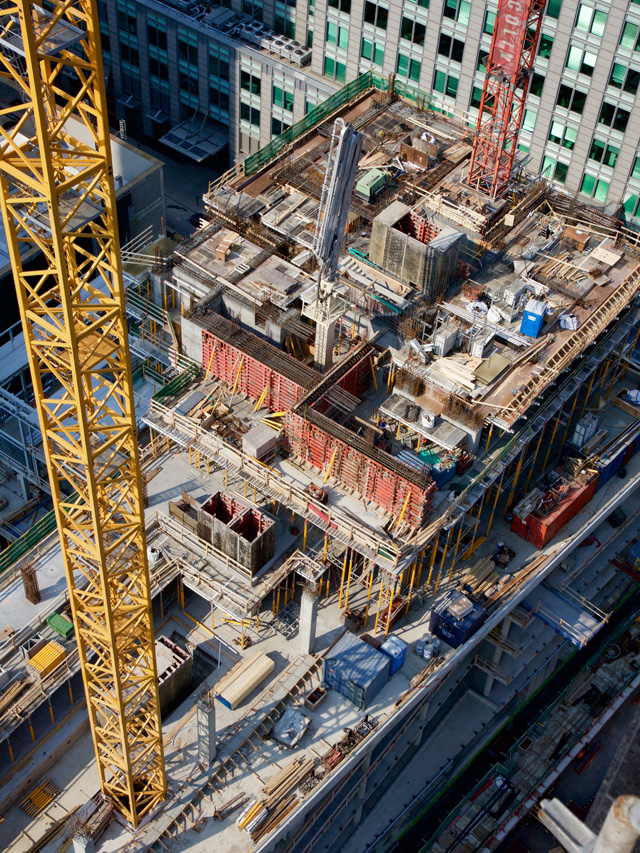 By comparison, a nearby tower using a glazed curtain wall system took over six months longer to build. 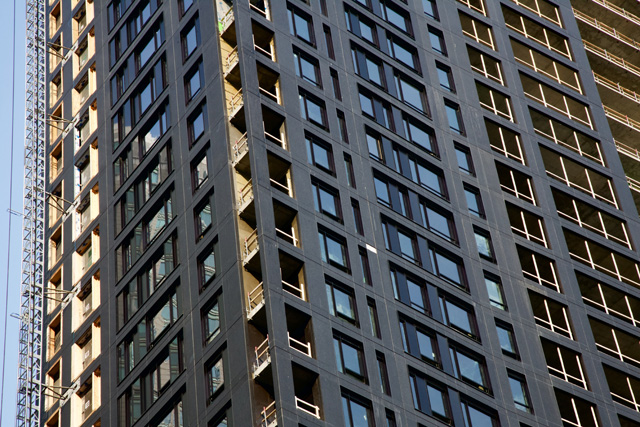 Special areas of the precast plant were organized to store the windows sent by the window supplier and then to install them inside the finished concrete panels.

A concrete frame was made for each precast concrete panel according to the shape and details of each panel. Once the panels were demoulded and cleaned, they were prepared for finishing: sandblasting, installation of windows and caulking. Having all work completed inside a controlled factory delivered higher quality compared to the same work done on the job site