Champagne - Quarry Park in Calgary is a recent example of what is happening in many parts of the country where former industrial lands along water- ways near city cores are being rejuvenated as self- contained communities. 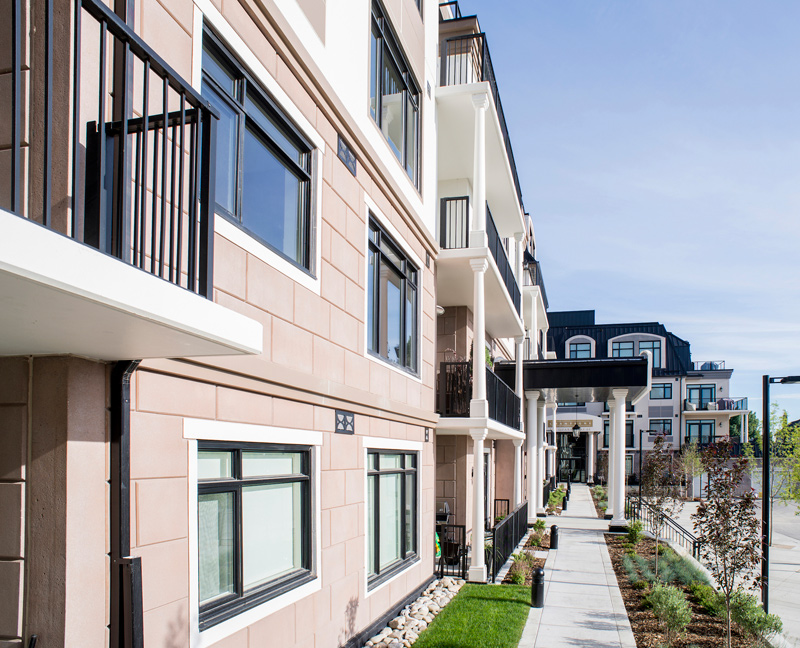 In this case, over 162 hectares [400 acres] of a former brownfield site in southeast Calgary near the Bow River, which once included a gravel extraction facility for Lafarge Canada, has been master planned as a mixed-use community with many amenities.

Upon its final build out it will include approximately 2,200 residential units [single-family residential, multi-family condo and rental units in apartment and townhome styles], 316,000 square metres [3.4 million square feet] of office, and a central retail market of 8,463 square metres [91,000 square feet] with a neighbourhood grocer, pub, restaurants and coffee shops. A YMCA operated 350-space childcare facility is under construction as well as a City of Calgary community recreation and wellness centre, and a hotel is planned. Quarry Park will ultimately be home to 6,000 residents and employ over 15,000 people.

A project of Alberta-based Remington Development Corporation, which since its inception in 1994, has completed over 1.3 million square metres [16 million square feet] of commercial real estate development, and over 625 hectares [2,000 acres] of land development, Quarry Park is intended as a live-work community, with all of the attractions one would find in the city core. 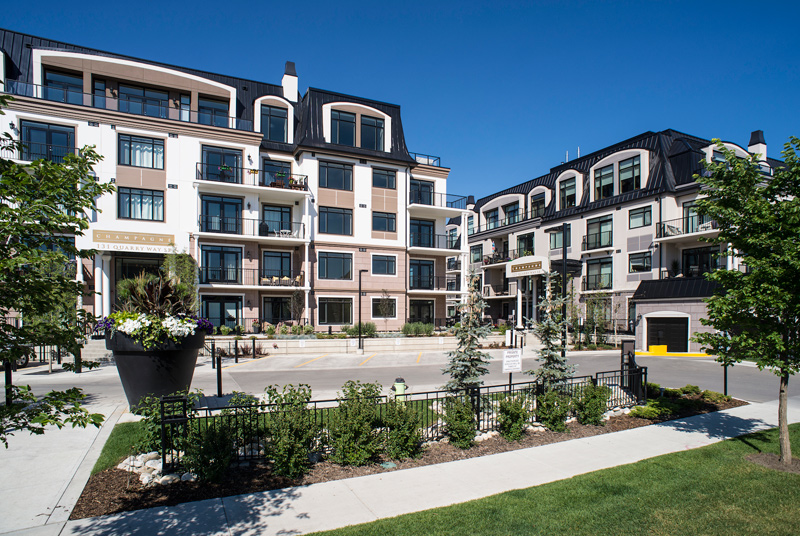 Another important amenity is the nearby 225 hectares [90 acres] nature reserve along Alberta’s historic Bow River. The City of Calgary’s Bow River Pathway network traverses through the Reserve and the community, providing pedestrian and cycle access to Quarry Park from all quadrants in the city.

The project comprises five individual four- and five-storey buildings located on top of two levels of interconnected underground parking. The architecture is French provincial, which is supported with details such as natural stone and steep-pitched roof lines. It has balconies and large windows, and arched detailing over the top windows.

Colour palettes, construction materials and specifications differentiate this property from any other in Alberta. Precast was chosen for its resilience and inherent fire resistance - both being key requirements for this property. The interior uses long-span concrete hollowcore floor slabs supported by precast concrete shearwalls. 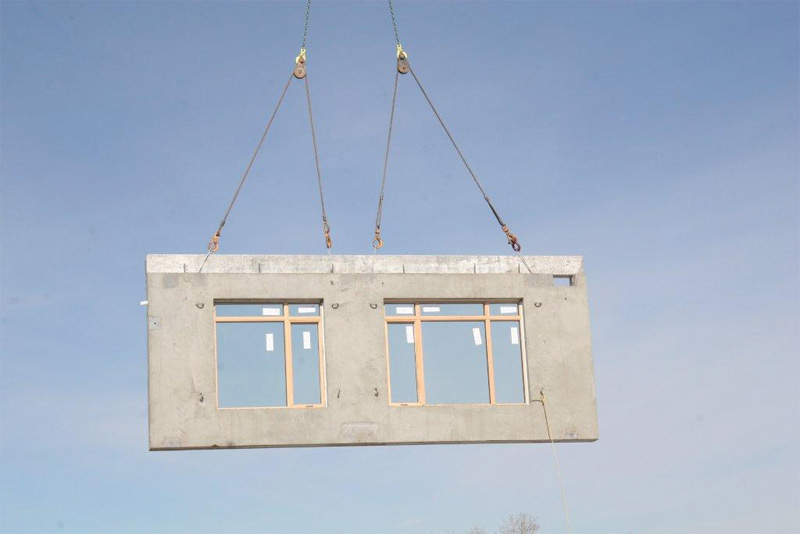 Special attention was given to the design of the building envelope. The project used the services of a professional building envelope specialist. Knowledge learned from Lafarge’s Habitat for Humanity net zero demonstration project was incorporated into this project.

The building envelope consists of 7,998 square metres [86,000 square feet] of precast R-20 double wythe insulated panels capable of withstanding extreme weather events. Installation was completed with a 265-tonne crawler crane that was able to achieve all of the precast lifts from the street side of the structure. 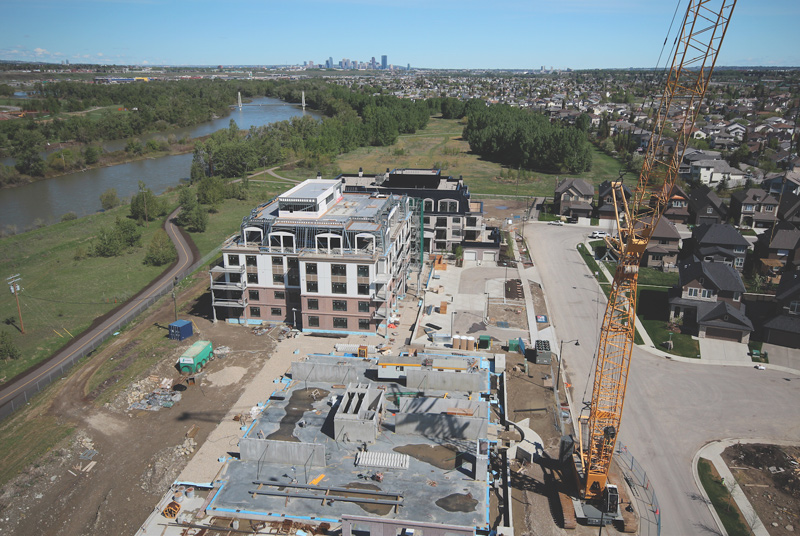 Stairs, stairwells, and elevator shafts were also constructed with precast concrete; but so, too, was some of the detailing. For example, the exterior building finishes were completed in the precast manufacturing facilities, enhancing the building look during all stages of construction. Windows were also installed into the precast panels at the precast plant during winter construction to eliminate the need for temporary hoarding. 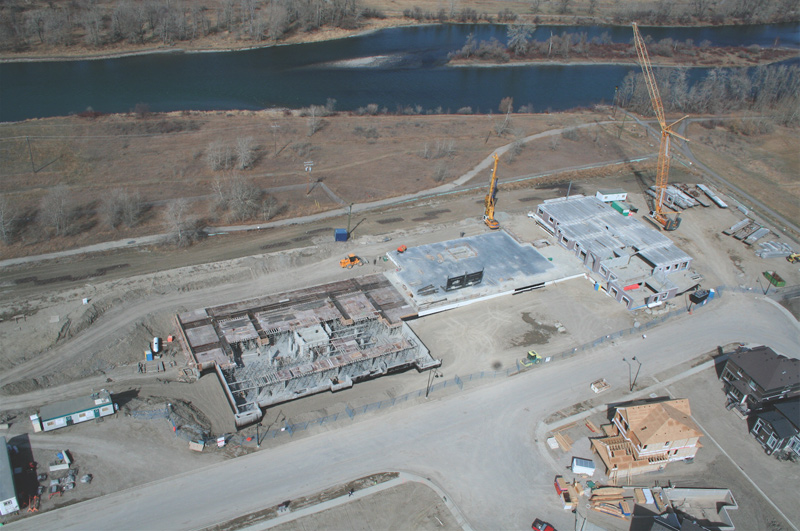 Attention to detail in drip keys, joint location, flashing and venting as well as transitions to different components, such as windows, ensure that the buildings will provide owners with extremely high building reliability levels and reduced maintenance.