The new Surrey City Hall and Plaza, a winning project of the 2015 Canadian Green Building Awards, house the City’s municipal government and anchor a vibrant new urban Civic Centre for the second largest municipality in British Columbia. Central to City Hall’s public role is its light-filled atrium, a gathering and event space at the heart of the 16,500m2 [177,540 square feet] building. It provides physical and symbolic connections between the Plaza and the city beyond and expresses open and democratic governance. 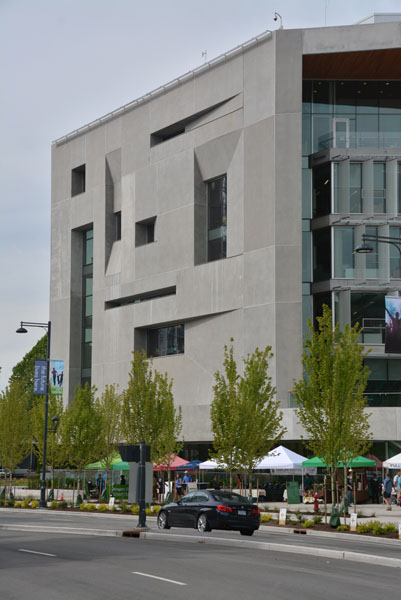 The Plaza invigorates public life with its multi-level green terraces, rows of shade trees, and connects the new City Hall with Surrey Central Library, a future performing arts centre, high-density mixed-use developments and the SkyTrain rapid-transit system. One of the greatest paradoxes that faces current suburbs is that on one hand they continue to grow, and on the other hand, the population is becoming increasingly conscious of environmental issues and the importance of reducing energy-dependence and ecological footprint. 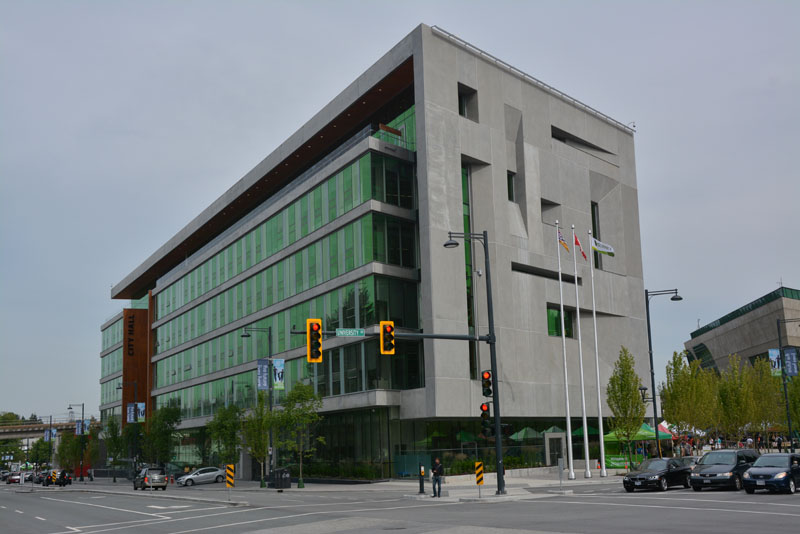 The strategic decision to move City Hall from the outskirts of Surrey, a location accessible only by car, to a centrally located brownfield site has done just that. As such, the project sets an important precedent for a new, integrated and more sustainable urban vision for the city. Situated on the flood plain of the Fraser River, the Civic Centre has a number of storm water features to alleviate flooding and excessive run-off. The large plaza is made of permeable interlocking concrete pavers and has two retention tanks to maximize water reuse and control flow-back to the regional water systems. The green roofs and garden terraces are planted with low-maintenance, native vegetation. Rainwater is collected and stored for re-use, while low-flow fixtures minimize water usage within the building. 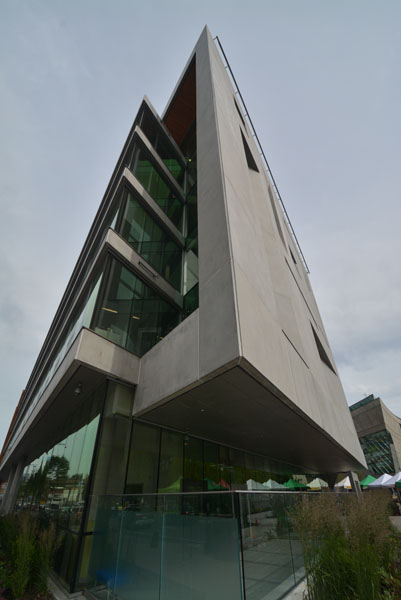 Precast concrete origami at the west wall
By Slavek Piotrowski

The west feature wall is comprised of an intricate array of 50 varying geometric-shaped precast prestressed concrete panels with deep recesses that invite natural light into the interior spaces. It required a lot of planning to fit them together in a particular order as in a jigsaw puzzle. Armtec had to make numerous shop drawings based on the ideas of the architects, and with the overview of the structural engineers. 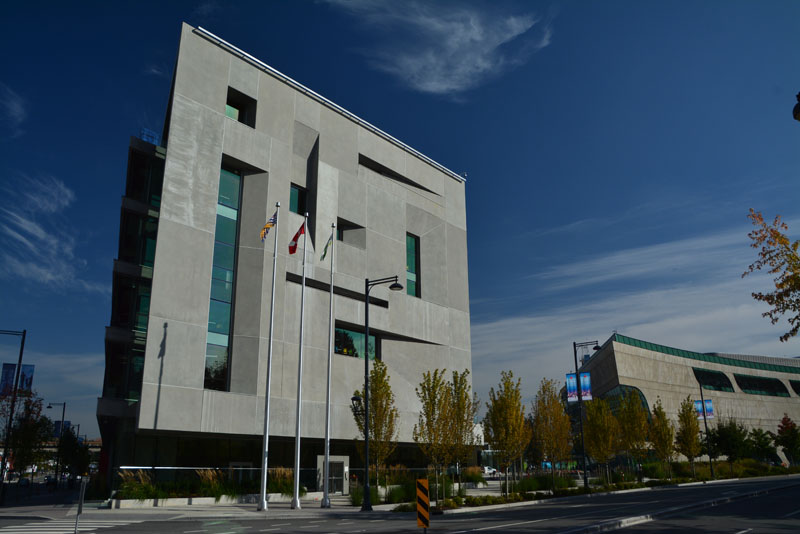 We visualized the wall by breaking it down into 15 horizontal sections and 10 vertical sections. We kept the panels thin, only 90mm compared to the usual 150mm, so that their dead load, supported on steel framing, would be less.
The precast concrete pieces ranged from 1m x 1.5m [3.3 feet x 4.9 feet] up to 12m long x 3m wide [39 feet long x 9.8 feet wide], and were prestressed for rigidity so that we were able to reduce the thickness. In many of the panels eight steel connectors were embedded instead of the usual four connectors to give the thin panels more support points while also distributing the dead load over more of the steel framing. The architects, Moriyama & Teshima, wanted the panel joints to fall in certain locations for the best visual effect, and we consulted with them to ensure that joint location did not lead to the possibility of water infiitration.

Movement joints were also necessary for seismic resistance. These consisted of bolted connections with slotted inserts at one end of a panel, and a rigid welded connection between the embedded steel connector and the steel support framing at the other end. The panels have a light sand-blasted finish.

Slavek Piotrowski is the Project Manager/Design Engineer at Armtec. 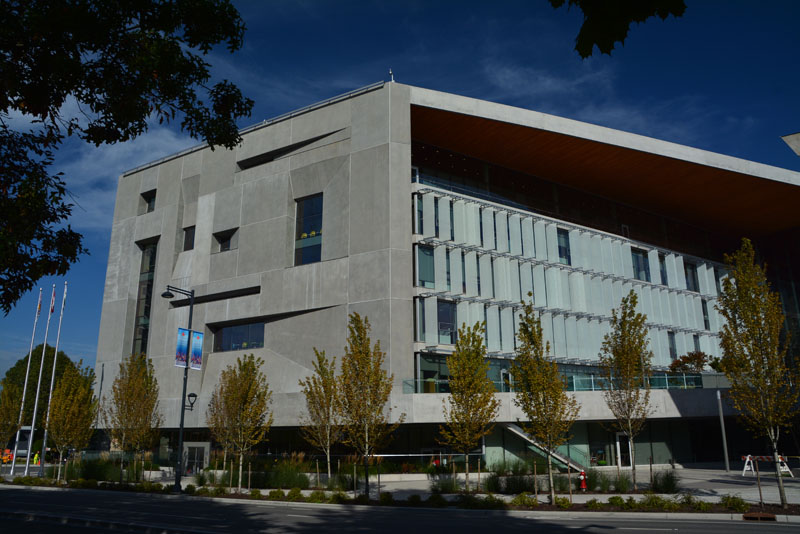 The Surrey Civic Centre incorporates sustainable design strategies such as a geothermal heat exchange system for winter heating and summer cooling. The success of this installation has initiated planning for a city-wide district energy system. In addition, the 31-metre [102 feet] tall glazed atrium admits abundant natural light and facilitates natural ventilation – automatic sensors open and activate a natural chimney effect at specific temperatures. Adjacent office and meeting spaces use a high-performance HVAC system with occupancy sensors and individual controls. Building orientation and narrow floor plates maximize daylight penetration. Artificial lighting is controlled by daylight and occupancy sensors. Circulation corridors are organized at the centre of the floor plan, with open offices at the perimeter to make natural light and operable windows available at all workstations. 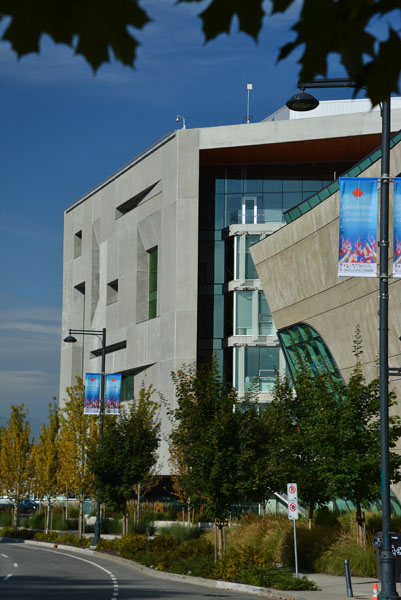 Precast concrete panels and windows along the west facade are designed to exaggerate geometry and depth, controlling the amount of natural light admitted into select interior spaces. The Surrey Civic Centre was designed to accommodate future changes in technology, workplace operations and demographics. For instance, the Council Chamber is designed to transform into a performance venue, and the reception desk converts to a raised platform for community performances. The initial consultation process and continuous engagement with the users and the community has resulted in residents who take great pride in their new Civic Centre. They have a deep understanding and care for living and working in a sustainable environment that includes electric car charging stations, green features, natural light and ventilation, access to public transit and a pedestrian-focused civic centre. 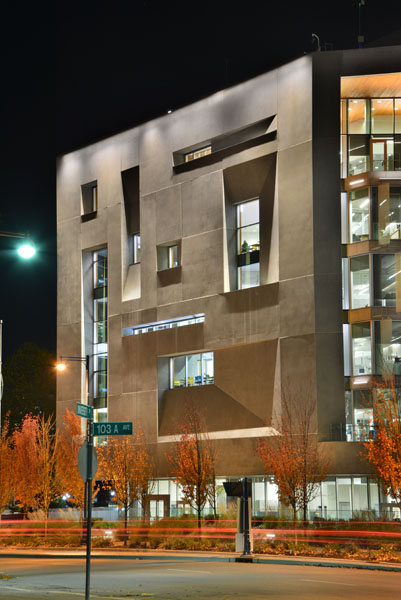 Diarmuid Nash is a partner at Moriyama & Teshima Architects.