Circa 1877 is a 20-storey total precast condominium in Waterloo consisting of five parking levels, 14 residential levels and one mechanical penthouse level. The existing site was previously home to one of Canada’s first craft brewers from 1984 to 2015.

Prior to that it had been home to two separate furniture manufacturers dating back to 1877. It was one of the oldest manufacturing buildings to remain in use up to 2015, granting it heritage status. A portion of the original facade was incorporated into the new structure honouring its long history in Waterloo. 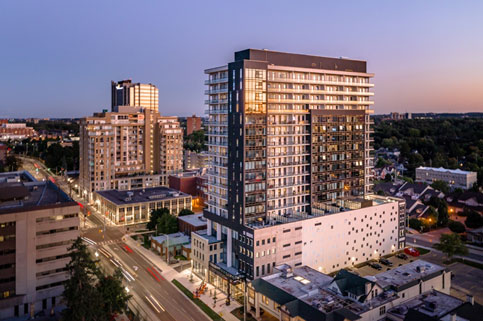 Fusing historical brick and beam elements from the former Brick Brewery with modern architecture, Circa 1877 has numerous amenities which include boutique shops and proximity to the LRT. The lobby features a welcoming seating area, the second floor houses a restaurant with a patio overlooking King Street, and a landscaped sixth-floor sky terrace is complete with a pool, lounge, and cabana. 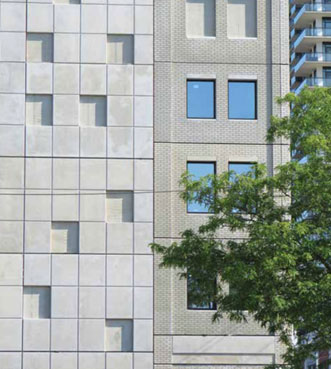 A project of HIP Developments, one of southern Ontario’s most forward-thinking residential developers and known for its projects, the Gaslight District, the Riverbank Lofts, and the Belmont Trio (see Spring /Summer 2017 Imagineering), Circa 1877 continues HIP’s philosophy of creating projects that enliven and enhance the character of their neighbourhoods. Interior spaces also include a fitness centre and yoga studio, a lounge bar services to host events, and co-working spaces with breakout rooms. Those residents with green thumbs can enjoy the community garden. 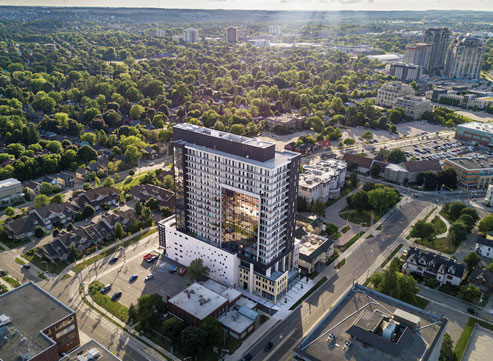 Precast concrete was selected for its consistent quality and speed of erection. With an average install duration of six days per floor, the precast contractor was able to progress quickly from the foundations to the roof slab with a small crew and tower crane. Site access was limited due to tight site boundaries so prefabrication made the most sense allowing for minimal trades on site. Careful consideration was required when designing the structural layout to transfer loads around and through the existing heritage structure. A pool was also integrated above the parking structure at the terrace level adding further complexity to the design. 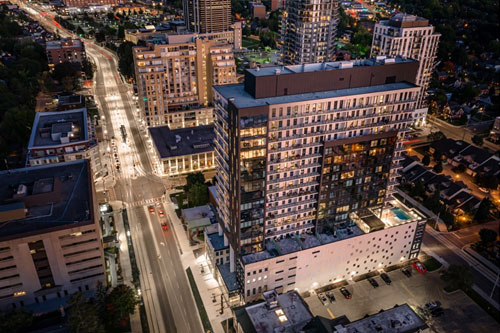 Lastly, one of the biggest challenges was the detailing and production of the parking garage elements. Since the ramp is continuously sloping as the floors progress, the bearing ledges on the beams and walls had to be modelled with extreme accuracy. Even a small deviation from the shop drawings would have caused fitment issues and misaligned sloping on site. The use of 3D modelling software (Tekla Structures) was key in the success of this project, along with a great team. The heaviest components on the project were multiple precast beams at the fifth floor ceiling of the parking garage. The beams weighed 22,544 kilograms (49,700 pounds) each and had to be lifted into place using a separate mobile crane due to the weight exceeding the tower crane lifting capacity. The aesthetic and structural possibilities of precast concrete allowed for the integration of the new and old to produce a stunning structure.

Sean Bickell is with Stubbe’s Precast.