Parks Canada started building wildlife overpasses in Banff and Yoho national parks decades ago. Combined with wildlife fencing along the Trans-Canada Highway, the overpass crossings have been a huge success in reducing animal-vehicle collisions and in aiding animal migration.

The new wildlife overpass in Yoho National Park near Lake O’Hara in BC is now one of seven in the Banff and Yoho national parks. In addition to the seven overpasses, the wildlife crossing network is made up of 38 underpasses in Banff and three in Yoho. 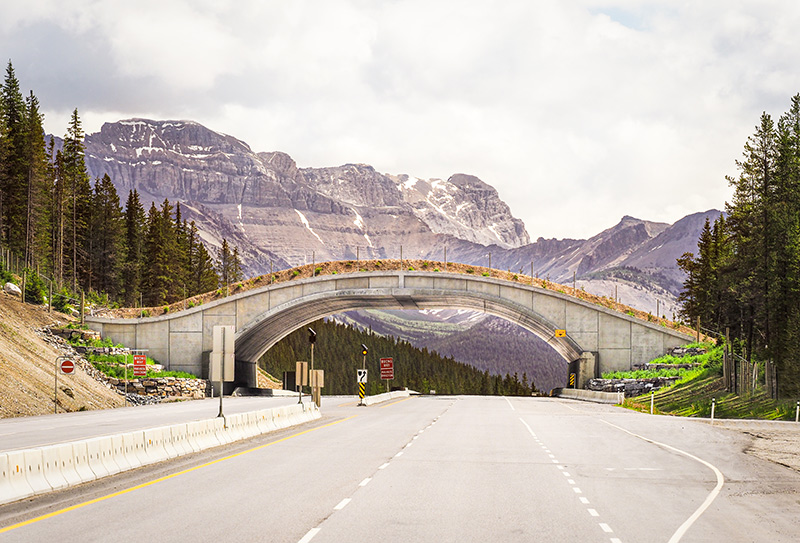 The $6.5 million Yoho Wildlife Overpass spans 33 metres (approximately 108 feet) over six lanes (four lanes of highway and two merging lanes), making it one of the largest in the world.

The other animal overpasses in the region are built as double arches: two smaller arches, supported in the middle at the centre median of the highway. Topographical restrictions around the new Yoho overpass meant a double arch wasn’t an option, while the concurrent twinning of the highway at the overpass location presented the opportunity to build a single-span arch.

Wildlife specialist Seth Cherry said the location was selected based on modelling animal movement on a large landscape scale to get a general idea of the high potential crossing areas. Road noise, which can disturb the wildlife, was reduced by building a berm on either edge of the crossing and filling it with native trees, grasses, rocks and vegetation, making the man- made structure blend in with the natural environment. Monitoring cameras installed on the overpass ensures that it is protected from human contact and scents that would scare off wildlife.

As the Engineer of Record for the overall structure, COWI North America Ltd.(COWI) recommended the single arch arrangement and established the geometry, applied loadings, structural components and foundations based on Parks Canada’s requirements. COWI also developed the shape and viability of the precast concrete arches including all the required loadings and deflection limitations.

According to engineer Darrel Gagnon, VP and Technical Director at COWI, the final detailed design of the precast concrete half arch segments was made a design-build component of the contract and awarded to CVL Engineers, with Eagle Builders manufacturing and installing the precast concrete half arches. In deciding the method of joining the arch segments at the crown they opted to use shoring and a 2-metre (6.5 feet) wide cast-in-place concrete closure strip along the crown of the arches.

Precast concrete was chosen for its high strength to achieve the single span, and for its fast, modular construction. Erection of the 100 half arch segments required coordination with both the general contractor and Parks Canada and was completed in just three weeks. Special equipment was used to move the half arches 20 metres from the material handling yard to the erection location. 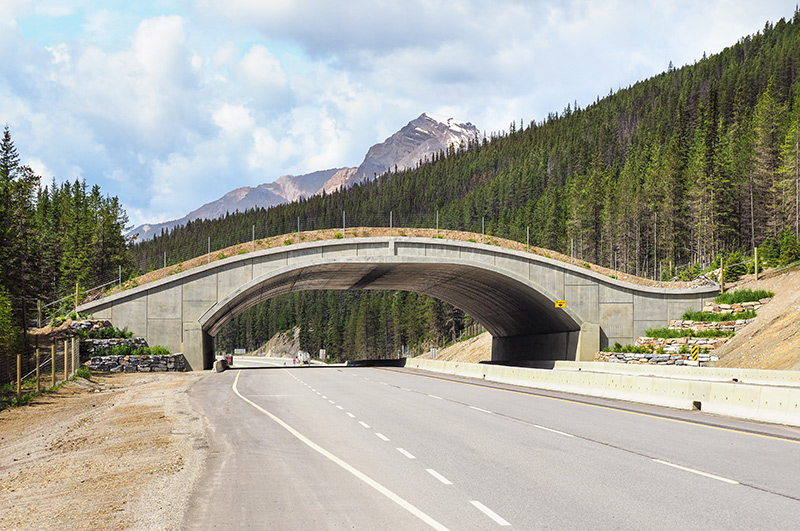 Construction occurred during the summer months when the volume of traffic on the Trans- Canada is high. Halting traffic in alternate lanes allowed the installation of the precast concrete arch segments, and for traffic to pass through.

Arch curvature was based on the topography of the site, and the existing road profile. All joints on the top deck between the precast concrete arch segments were packed with a butyl rubber sealant followed by an application of a polyolefin-backed exterior joint wrap.

Mechanically Stabilized Earth (MSE) precast concrete panels, 3 metre x 3 metre (approximately 97 square feet), from another supplier, are used to finish the walls and extend above the top surface of the arch.

Jason McNutt is the Infrastructure Project Manager at Eagle Builders in Blackfalds, Alberta.