The Ruth Gardens project is a mixed project by Edison Properties, which has a rich history of providing living spaces in Winnipeg. On the site occupied by a former strip mall, the project has three residential 10-storey towers and commercial space located on the main floor of the building, and a separate single-storey Scotiabank to be located on the corner of Rothesay and Sharon Bay. 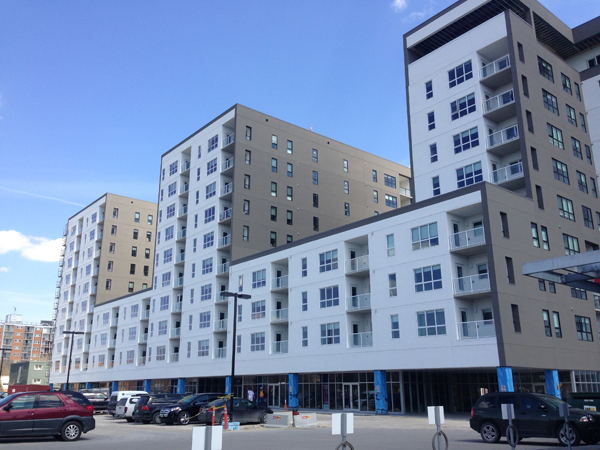 In total, the building comprises 1,860 square metres [20,000 square feet] of new commercial space separated into four units. Scotia Bank remained in operation for the duration of the construction schedule. The new Scotia Bank is a stand-alone building. Furthermore, there was consideration given to building a commercial restaurant unit at the north end of the main floor.

Above the commercial space, the residential component consists of 214 apartments ranging in size from 65 to 102 square metres [700 to 1,100 square feet] spread out over 10 storeys in three separate towers linked by a common podium. The total height of the building is 33 metres [110 feet]. Each of the first three storeys of residences includes amenity spaces for use by the ten- ants such as an exercise room and multi-purpose room complete with kitchen area. 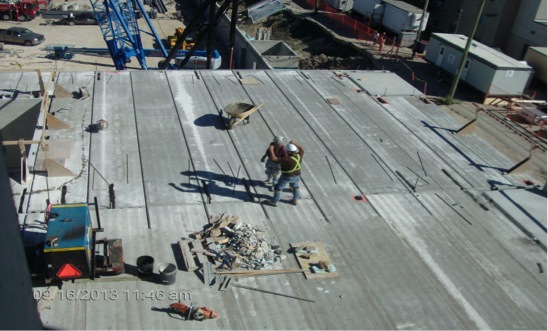 Parking of 156 indoor parking stalls was broken out between one storey of underground parking containing 109 stalls, and 47 stalls on the main floor behind the commercial spaces. The rest will be surface parking divided between the east and west sides of the building.

The intent of the design as built was to be sensitive to the neighbourhood, which is why the building was broken into three towers rising from a four-storey base. The floor plate of each tower contains only seven units. The thin towers and the orientation of the towers on the site are intended to avoid the look of a massive building. The three individual towers keep the off-site shadows to a minimum while al- lowing the sun through on the east/west axis between the towers and along the south property line into the site. 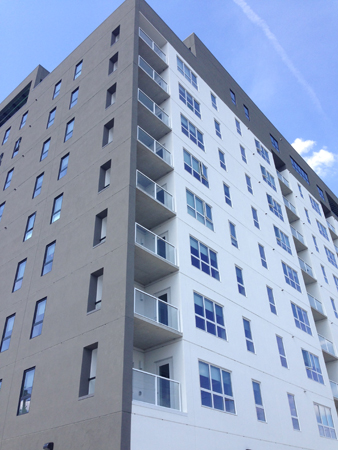 We provided extensive landscaping on the site, a typical mature tree as shown around the perimeter of the building will grow up to 12 metres [40 feet]. These mature trees will eventually mask the four storey base of the building, again hiding the mass and exposing the thin towers, allowing them to appear as free standing behind the tree line.

Landscaping in very important to us and guided our decision to create a parkway between the Scotia bank and the apartment block along Sharon Bay. The parkway is a place where residents and visitors alike can have a sense of garden within what would be a heavy commercial area.

Building the towers
Crosier Kilgour and Partners Engineers designed the podium and did the load analysis of the entire structure, which Lafarge Precast used to design the 10-storey towers. The towers were designed using Tekla software, which can detail all kinds of structures, manage fabrication, plan erection and find potential problems early before fabrication. It integrates precast design and detailing with manufacturing and project management: the software interfaces with production management systems [ERP] and automation machinery. Tekla enhances communication between precaster and the contractor and coordinates precast concrete production with site operations through Tekla BIMsight. 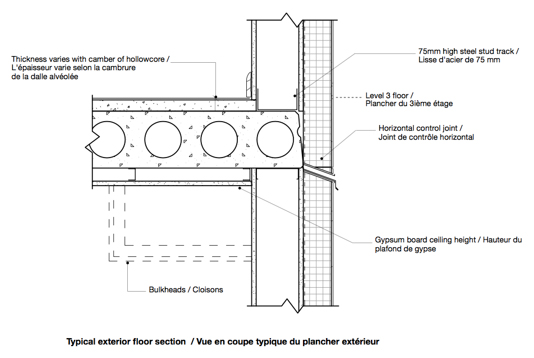 The creation of the greenbelt could only be accomplished by changing the south tower orientation to a north/south direction as opposed to the east/west orientation of the north and central towers.

We see the commercial functions of the main floor and site being accessible to pedestrians and we felt that the park would encourage that pedestrian traffic into and through the site. Furthermore the frontage of all commercial space has an extensive overhang, again for the purposes of creating a comfortable environment to encourage pedestrian movement. 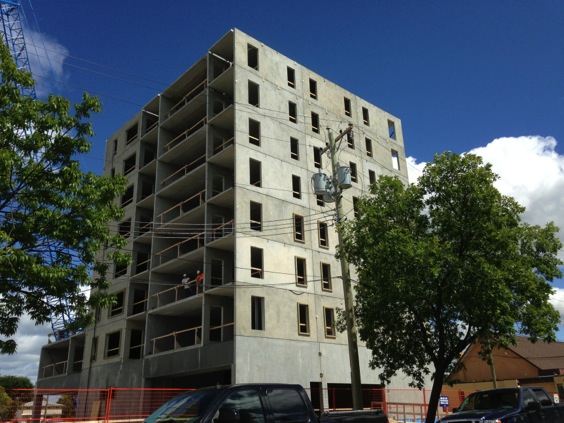 The entire development has been designed to be user friendly, whether by vehicle or foot, while providing the quality of living environments that the developer, Edi- son properties, has always maintained.

Christopher P. Daly, MAA, SAA, RAIC is a LEED Accredited Professional and a principal with MMP Architects in Winnipeg.