As one of the fastest growing municipalities in Ontario, Markham has been constructing major new facilities to improve the quality of services it provides to its citizens. One of those new projects is the Cornell Community Centre and Library in the eastern part of Markham. The Cornell Centre is connected to the Markham Stouffville Hospital and is part of the city’s expansion plan for the complex. The multipurpose recreation centre was built to encourage citizens to improve their overall health and well-being. The Cornell Community Centre and Library houses a recreation complex, multipurpose community centre and a branch of the Markham Public Library in a 14,100-square-metre facility. 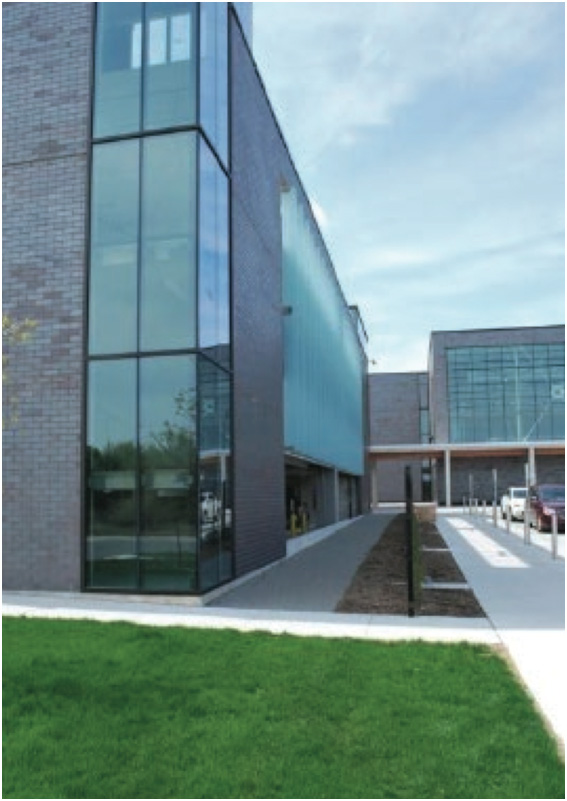 All precast components were supplied by The Prestressed Group through their manufacturing facilities in Windsor, Ontario, and River Rouge, Michigan. The central lite walls were the largest components produced, weighing around 36,500 kilograms, and had to be stripped from their casting beds with two overhead cranes simultaneously. The precast components were designed for increased loads due to future expansion plans of the parking structure from three to five levels, bringing its capacity to 500 parking spaces.

Perkins + Will’s vision for the parking garage was simple: build a three- level LEED certified parking structure that would fit together with the surrounding buildings. To achieve the desired look, PSI used thin brick faced precast panels for the columns, top perimeter non-load bearing brick spandrel covers and stair walls. The 13mm thin brick used for the precast panels was a perfect match to the brick veneer walls of the community centre as well as the energy building it is connected to. The thin brick column covers were produced as a full piece to cover each exposed column around the perimeter of the structure. JVI slotted inserts were used along the inside face of the column covers to complete the connection to the column face. The bottoms of the panels were tied into the column base with a pin connection. 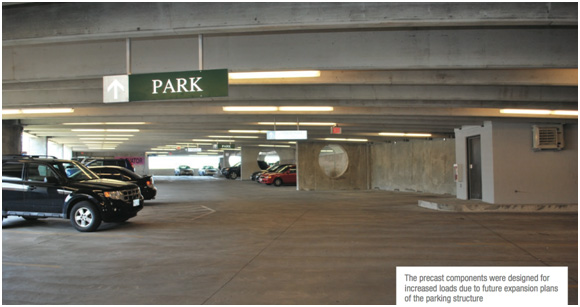 Due to the construction congestion on-site, space restraints were a challenge for the erection crew. “Only five truckloads could be staged on-site at once,” says Kristina Gibson, project manager at PSI. “It was a very tight site.” Regardless of the conditions, PSI managed to install all precast components on schedule.

Since the Cornell Community Centre and Library parking structure began operating in 2012, services to the citizens of Markham have been enhanced not only through efficiency of design but by architectural sensitivity given to both the interior and exterior spaces. Precast concrete was key to realizing Perkins + Will’s vision and the city of Markham stands to benefit from this LEED Silver parking structure for many years to come.