Phase 4 improves safety on this dramatic and breathtaking stretch of the TransCanada Highway by replacing two lanes with four lanes and realigning curves to accommodate 100km/h driving speed. 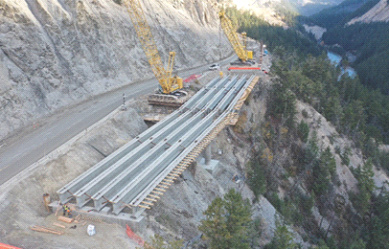 Phase 4 lies between the previously completed Phase 3 West (Golden Hill to West Portal) and Phase 1 (Yoho Bridge) sections. Now under construction, it will:

The Phase 4 “Canyon” section is the last and most difficult and challenging part of the entire Kicking Horse Canyon Project. A concept plan was developed as a “reference design” to accompany the written specifications in the design-build contract. 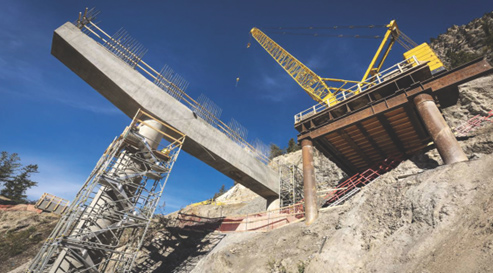 The improvements were to be made with a view to safety, cost-effectiveness and minimal disruption to highway users and the community. The total project cost for Phase 4 is estimated at $601 million, with the Government of Canada contributing $215 million.

The project design includes 42-metre (137.8 feet) long, 2-metre (6.5 feet) tall precast concrete NU bridge girders. These were the longest and heaviest girders ever to ship from Richmond, BC to Golden, BC and required special permitting and transporting with manned steering dollies. Weighing 64,800 kilograms (64.8 tonnes) each, the girders were installed with two, 275 Ton crawler cranes working at about 85% capacity.

The Sheep Bridge is the first structure one encounters travelling east and will be the first bridge deck cast in May 2022.

The terrain presented a challenge of limited space which meant completing first the two east-bound lanes, diverting the traffic to these lanes, and completing the two west-bound lanes. Unstable rock and earth above and below the existing highway added another complication.
To overcome this, the bridge is supported by several drilled shaft piles and drilled micropiles (high-capacity, small diameter, drilled deep foundation elements) that are cast within the concrete pile caps and abutments and drilled five to nine metres (16.4 to 29.5 feet) into bedrock.

Special precautions were required in the form of ground monitoring radar to measure any movement and a rock catchment fence to protect the CP Rail track that runs below the existing highway and parallels the Kicking Horse River.

The NU girders are supported on a centre pier and two transition piers (one at each end). The center pier is, in turn, supported by two columns with pile caps at their base that encase 12 micropiles each. The transition piers are sup- ported by eight 914 millimetre (36 inches) diameter piles.

Developed at the University of Nebraska in the 1990s, NU Girders are precast prestressed concrete I-girders optimized for performance in two-span bridges and with full-length post-tensioning. The NU girders can either be pretensioned, post-tensioned or a combination of both techniques.

In a pretensioned girder as used on the Kicking Horse Canyon Project Phase 4, the top flange is reinforced with standard reinforcing steel comprising a basic grid of transverse and longitudinal bars, and four straight prestressing strands. The bottom flange is highly reinforced with straight prestressing strands. NU Girders can be fabricated in depths ranging from 1200 mm to 2800 mm, in increments of 400 mm. A 2000 mm deep NU Girder is referred to as an NU2000. 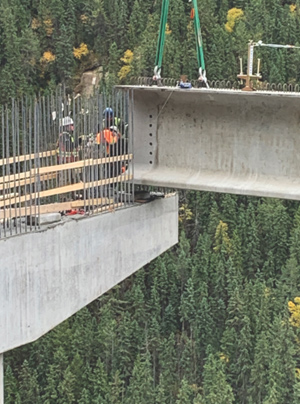 As a longstanding precast concrete manufacturer based in Richmond, BC since 1965, Con-Force Structures Ltd has the full suite of NU girder types which have become widely adopted in the past 20 years. Our apprehension with the 16 pieces of 2000 NU girders was not their large size of 42-metres (137.8 feet) long and weight of 64,800 kilograms (64.8 tonnes), but rather their safe transport to the project site.

In British Columbia the rules for transport east of Hope, BC require that girder length and weight not exceed 37 metres (121.5 feet) and 56,700 kilograms (56.7 tonnes). By contrast, Alberta, where roads are typically not as steep and curved as those in BC, permits the transport of longer and heavier loads.

Precast prestressed concrete girders that exceed the length and weight limits must be either shipped by rail car to a siding and then placed on steering trailers, or shipped in pieces and then post tensioned on site. 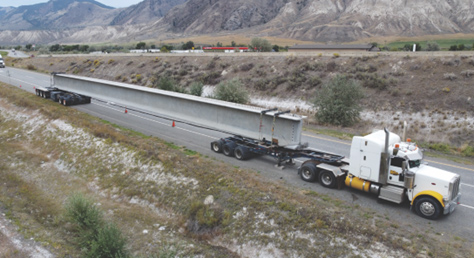 The use of rail cars and consequent splicing and post tensioning is always more expensive than a single prestressed girder, and adversely affects the competitiveness of precast concrete with other systems. And with the need to preserve riparian zones, bridge spans are required to be ever longer.

This was the first time that Con-Force has transported such a long and heavy load east of Hope, BC. Con-Force purchased four heavy haul steering trailers and our in-house heavy haul expert, Kieth Freeman, spent 18 months working with the extraordinary loads division of the BC Ministry of Transportation & Infrastructure to show that the girders could be transported safely.

Photos 1 and 5 by Con-Force Structures Ltd.
Photos 2, 3 and 4 by Kicking Horse Canyon Constructors