Place Ste-Foy offers a high-end fashion destination and distinctive shopping experience in Quebec City to an average of 8.7 million visitors a year.

In 2016, property owner Ivanhoé Cambridge announced the $60 million project to replace the existing facility of 1,500 parking spaces, that was at the end of its service life, by two new parking buildings with equivalent capacity. Phase I would comprise the building of a four-storey above-ground structure offering 682 parking spaces on the east side of the food court. A similar Phase II structure would provide 832 parking spaces over four storeys on the food court’s west side, replacing the existing structure. Phase I and soon to be completed Phase II will bring the number of parking spaces for electric vehicles to 12, as well as providing a supercharger for Tesla vehicles, and accommodating 290 bicycles, while improving pedestrian walkways to the shopping centre. 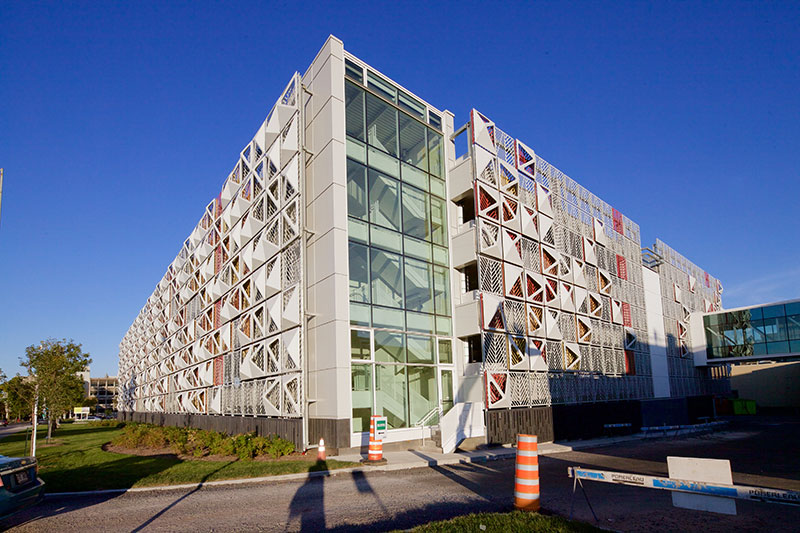 Façade Design
The design of the parkade façades reflects the history of Place Ste-Foy, starting with brightly painted leaf-like aluminum panels just behind the main façade to represent the traditional oak forests of the area, the oak tree being the image of the City of Sainte-Foy and incorporated into the logo of Place Ste-Foy. Former grocery store chains on the site in the 1950s and 60s stood out for their façades of repetitive and expressive geometry, and richly coloured mosaic of tiles associated with the muralist Jordi Bonet. In 2010, the addition of the Simons store added a new modernity with its elegant and expressive volumetric composition.

The development of the modular façade units by our team, based on precast concrete Eklips panels from Bétons Génial using high-performance fibre reinforced concrete [HPFRC], moved from calculations to achieve a high level of natural ventilation through the façade to the study of life-size samples. The whole system and its components had to be distinctive, aesthetic, efficient, durable and economically acceptable. The team also focused on integrating modern technologies, including digital sensors to identify vacant parking spaces, real-time annunciator panels, and the installation of superchargers for electric vehicles. 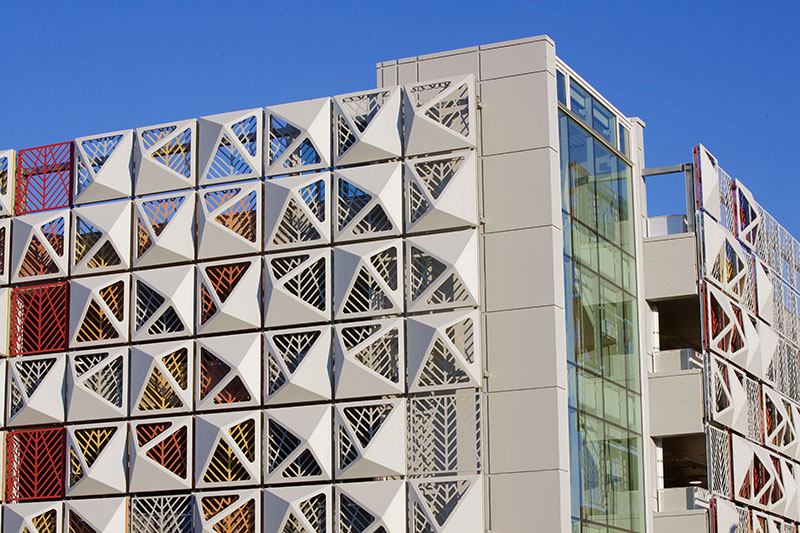 Guylaine Lafortune is a senior architect and associate at Coarchitecture in Quebec City.

We worked with Coarchitecture to fabricate the precast concrete modules for the façade according to their design: pyramidal modules backed by brightly painted aluminum leafor lace-like coloured panels, vertically-slotted wall modules, and flat wall modules. 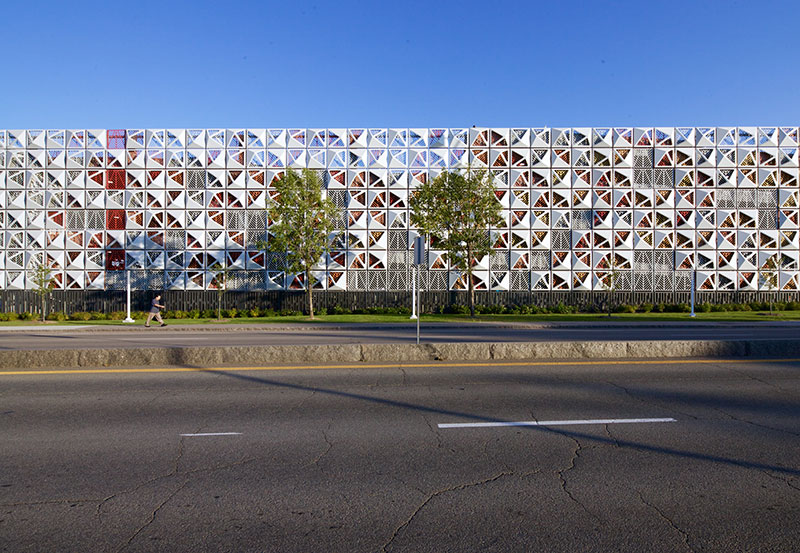 The modules consist of Eklips panels made with high-performance fibre reinforced concrete [HPFRC] which contains polymeric fibres, a high concentration of cement, admixtures and fine aggregates. This type of concrete can flex and provide much higher mechanical strength and durability than regular concrete.

During the casting process, anchors were inserted into the moulds at designated points and firmly embedded in the concrete. The anchors fit into slotted mounting plates that allow for easy adjustments during installation. The panels are designed to be self-supporting without need for any secondary support structure. 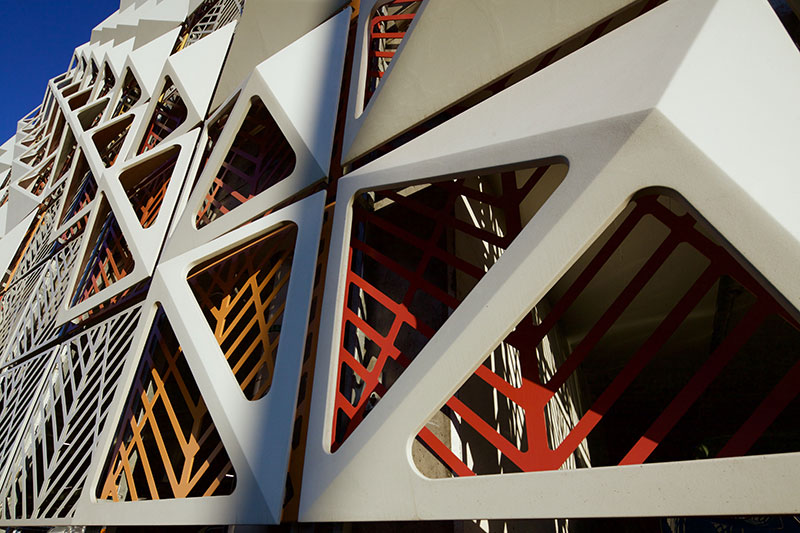 The Eklips panels require no steel reinforcement and will not corrode. The high-strength panels are light weight with a thickness that can be as thin as 19 millimetres [3/4 inch], eliminating heavy machinery for installation and reducing shipping costs. If necessary, they can be cut on site using a standard diamond saw. For this project, the average thickness was 25 millimetres [1 inch]. 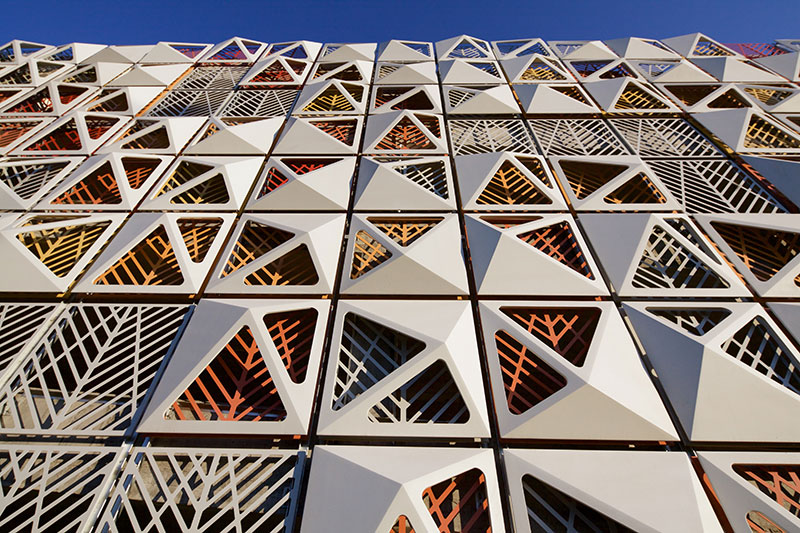 A major obstacle to overcome was the development of a hidden and complex fastening system, attaching the aluminium panels, used as railings [guard rails], behind the white pyramidal HPFRC prefabricated concrete panels. Thanks to the precision of the fastening system and the low weight of the prefabricated concrete panels, averaging 103 kilograms [225 pounds], it was possible to install the panels at an average rate of 30 per day.