Simons stores have always distinguished themselves with one-of-a-kind architecture and finishes for each of its outlets. Based in Quebec, the family-owned retailer, one of only a few Canadian-owned retailers left, offers a mix of private labels, and national and international clothing and home decor brands.

The distinct identity of the new Simons Vancouver Park Royal store - 9,200 square metres [100,000 square feet] on two floors - comes through in the dynamic architectural composition created by two shifted volumes which fit into each other, and through the Salish-inspired exterior herringbone finish achieved with precast concrete. At the north-west corner, the cantilevered volume acts as a signal element, and is also the background for the store’s signage, visible from the major intersection at Marine Drive.
The mall’s principal entrance, with a glass atrium and Simons storefront on the north-west corner, originates from the meeting between the two volumes, where a large plaza serves as a great gathering space. The upper volume also runs all the way to the east side, and generates the entrance. The height of the parapets of this upper volume hides a large part of the rooftop equipment. Finally, the south recessed entrance is fully glazed on two levels, welcoming ample natural light in the coffee space located on the second floor. 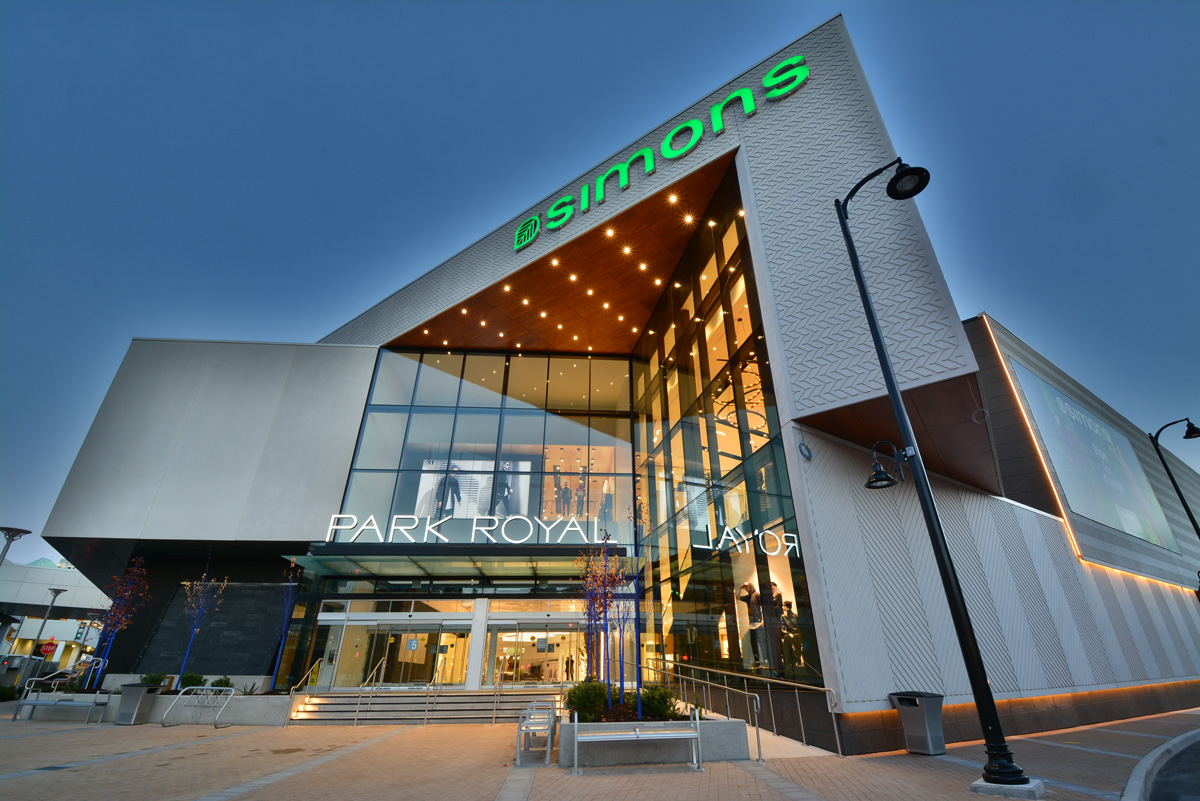 The location in Park Royal on land owned by the Squamish nation has a special significance because of the character and history of the place. The architectural envelope finds its meaning in the origins of Salish weaving in an off-white chevron or herringbone pattern to make blankets used as offerings at special events, and as gifts to notables. The appearance of the building envelope is based on the contemporary reinterpretation of the woven chevron pattern, moulded in the architectural precast concrete panels. The choice of the material was deliberate. Because of its extraordinary plasticity, precast concrete has the unique quality to be formed into any number of distinct patterns. It also lowered construction costs. 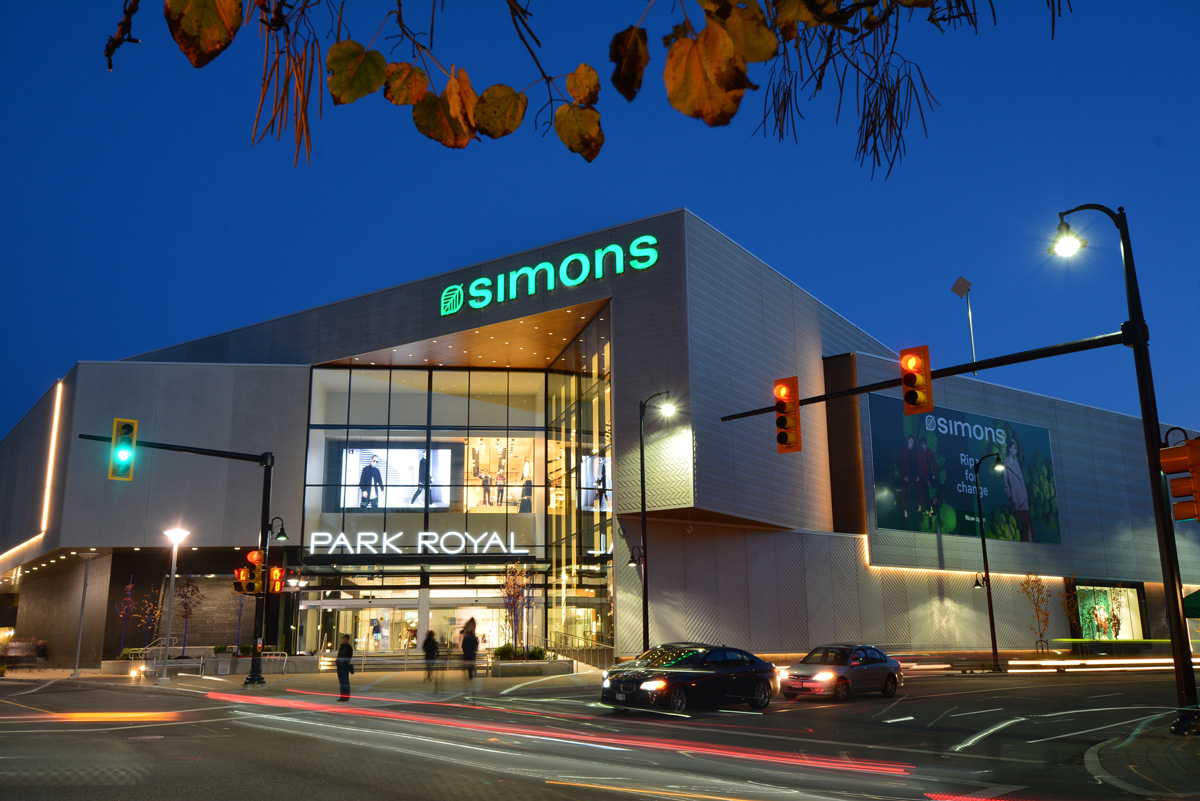 115 double wythe insulated concrete panels were used for the building envelope in an installation complicated by limited access in some areas, and by scheduling during the busy Christmas shopping season. The solution was to install the majority of panels on night shift and to use a large crane to install the pieces where access was limited.

Panel installation was completed within scheduled time frames even with some days of inclement weather which forced some shutdowns of installation activity. We worked closely with structural engineers John Bryson & Partners to avoid problems of connecting the stacked insulated precast concrete panels to the structural steel frame. We needed to maintain the correct alignment and patterns of the panels without overloading the steel frame and harming the integrity of the building envelope. 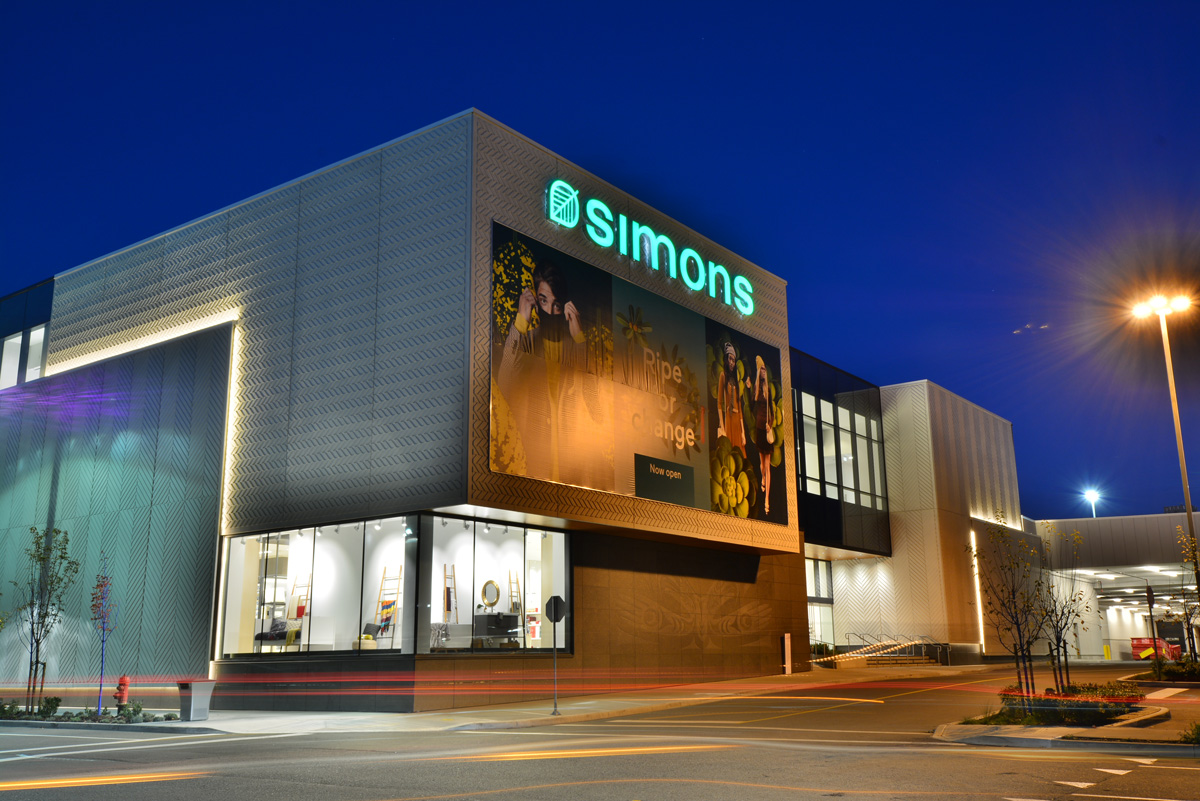 The “Blanket” Facade
By Jérôme Henné

Most building designs try to admit the maximum possible amount of natural light, however, retail stores often prefer more closed facades in order to control the artificial light for merchandise displays and customer experience.  This usually means facades with few openings as in the case of the walls on the east and west facades of the Park Royal Simons store, where one facade is one-storey high in relation with the second floor parking deck, and another facade is two-storeys high in relation to the street. The main challenge was to compose these facades in a dynamic way and break the monotony. 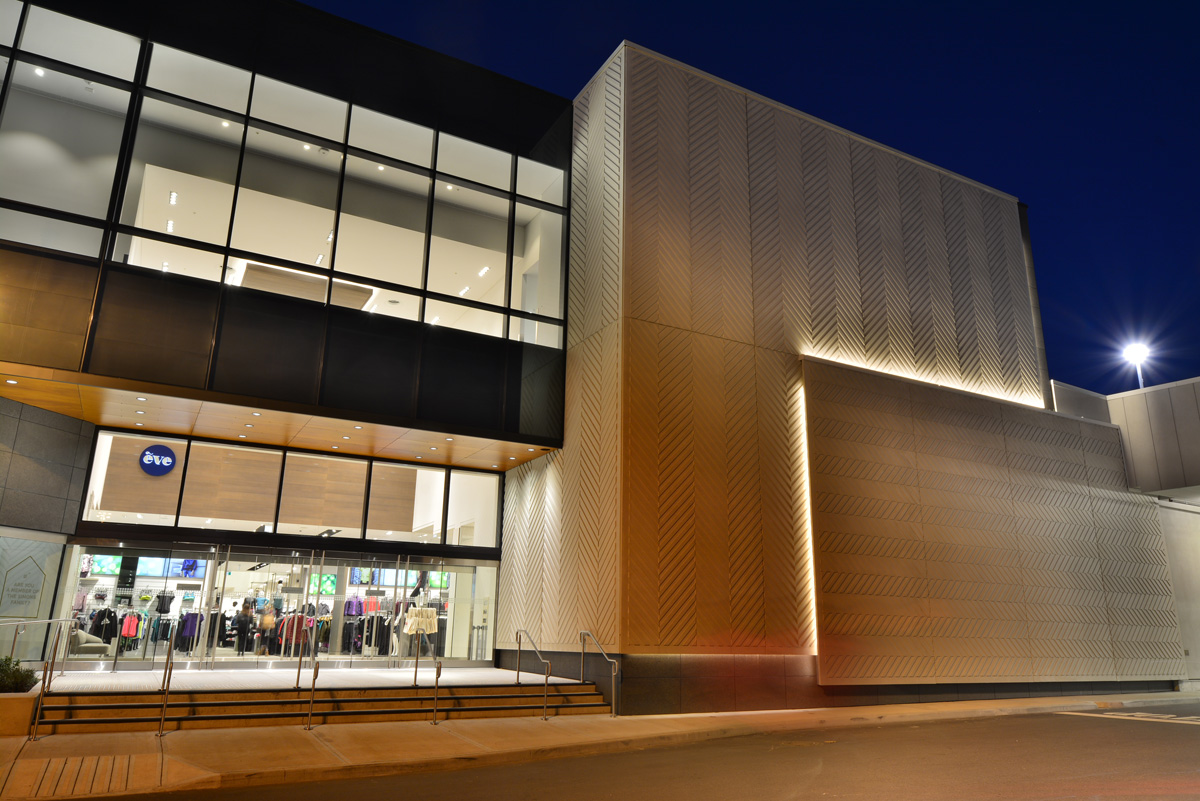 To animate the facades, panel offsets and overlays were created in order to suggest that the building envelope was made of a series of blanket layers. This combination leads to a breakdown of facades accented by shadows and LED lights that surround each panel overhang. Thus, we see on these long facades, large sections of panels which are juxtaposed over each other sometimes on the upper part or the lower part of the walls, and which are interrupted in certain places to reveal portions of stone walls or display windows.

Each section is covered with a chevron pattern print, suggesting the woven blanket, arranged vertically and horizontally according to four scales of sizes that additionally increase the diversity of textures. The vertical superposition of the panels was a big challenge for the project since it involved a transfer of the vertical loads to the steel support structure. Some details were redesigned to control sealing of the envelope and the panels joints. 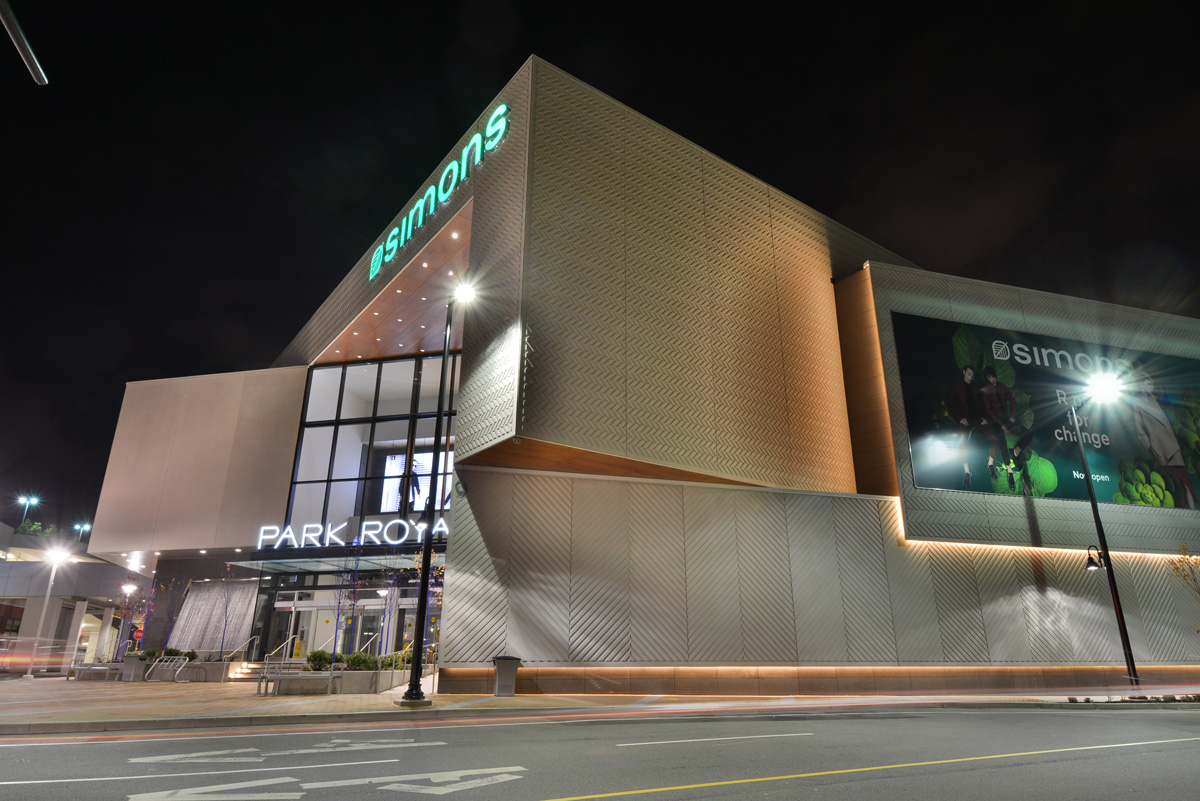