Replacing a bridge requires a deep understanding of current challenges and future needs, as well as thorough planning and coordinated execution. Other factors also loom such as environmental concerns, traffic mitigation plans, public support campaigns, funding models and the selection of the right partners.

The larger the project, the more complex these considerations become, so when the planned bridge is a $2.4 billion replacement for one of North America’s busiest spans, with 50 million vehicles passing over it each year, the stakes ratchet up to peak levels. 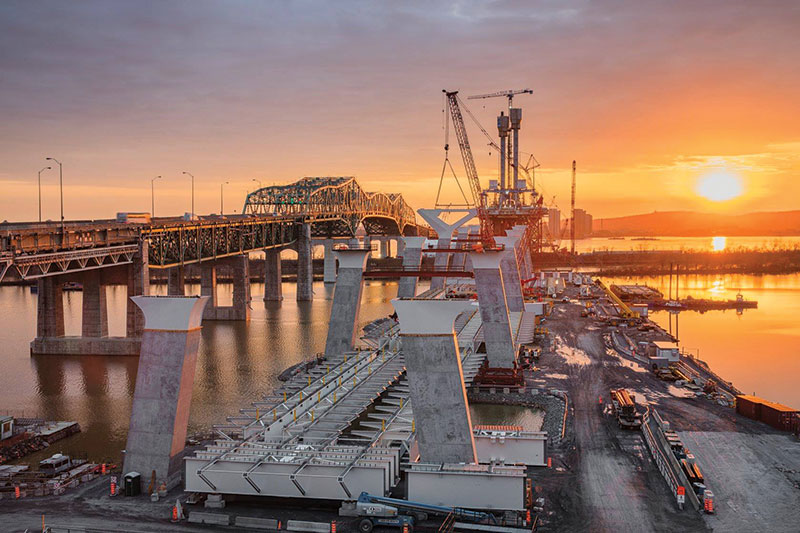 Among the top considerations for the new Samuel de Cham- plain Bridge – a 3.4 kilometre (2.1 miles) span over the St. Lawrence River that serves as a major link between the U.S. and Canada and the gateway to Montreal – were the timeline, aesthetics and lifespan. It’s no easy task to design and build a bridge of that magnitude that will both complement the city it serves and have a useful lifespan of 125 years. To attempt to do so in just 42 months, due to the state of the existing bridge, takes things to a new level.

“On a megastructure like this, even if you’re in very friendly weather, that would have been considered a very aggressive schedule,” said Marwan Nader, senior vice president with T.Y. Lin International Group and engineer of record for the bridge. “When you come to Montreal, there will be several months of winter conditions so you’re dealing with a much shorter duration of effective time. That, to some extent, was the focus of the design-build team when we were looking at construction means and methods.” 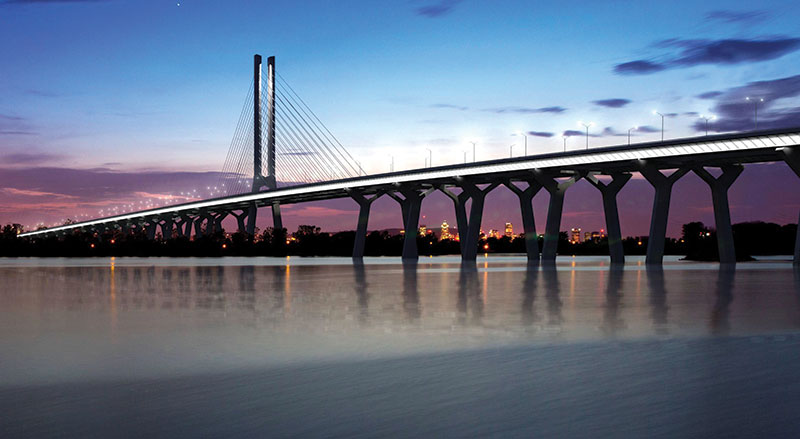 T.Y. Lin International Group is part of the consortium Signature on the St. Lawrence (SSL) which delivered the project in a public-private partnership with Infrastructure Canada. One element of the plan called for segments that a standard crane could lift to minimize the amount of field work and increase pace. In addition, construction crews performed work in parallel in three sectors: the west approach, the cable-stay bridge, and the east approach.

The team also chose to use various precast concrete products to accelerate the construction schedule. For example, precast concrete pier sections avoided having to deal with cast-in-place concrete and facilitated construction during inclement weather while maintaining quality. “With precasting inside a shop, you have a lot more control over quality and match casting,” Nader said. 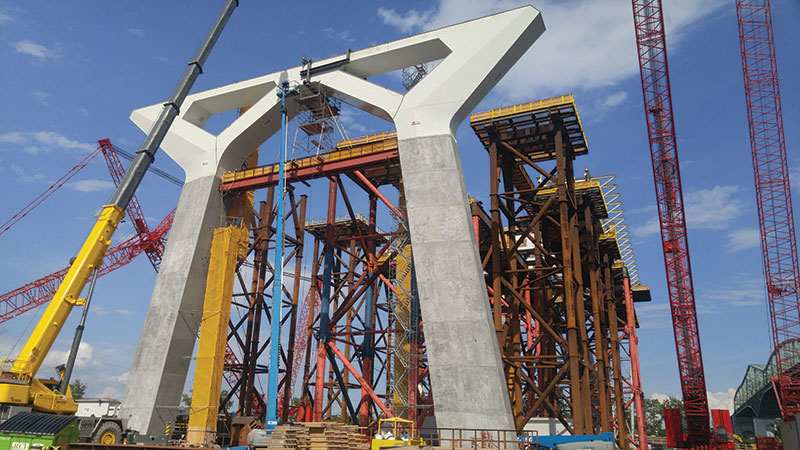 The structural precast concrete match-cast segments were used for the lower portion of piers along the west and east approaches and the inclined lower portion of the main span tower up to the upper crossbeam, referred to as the bow tie because of its peculiar shape. The segments of the west approach piers were set on gravity-based footings and pier starter segments cast in a temporary precast plant on site, due to weight.

In addition to the piers, the designers also specified precast concrete elements for the deck panels and other facets of the project to cut construction time.

“Extensive use of precast concrete for this project was based on the project’s tight schedule, the requirements for a highly durable product, and the fact that the bridge needed to be built during Montreal’s rigorous winter season,” said Guy Mailhot, chief engineer at Infrastructure Canada, the owner of the project. 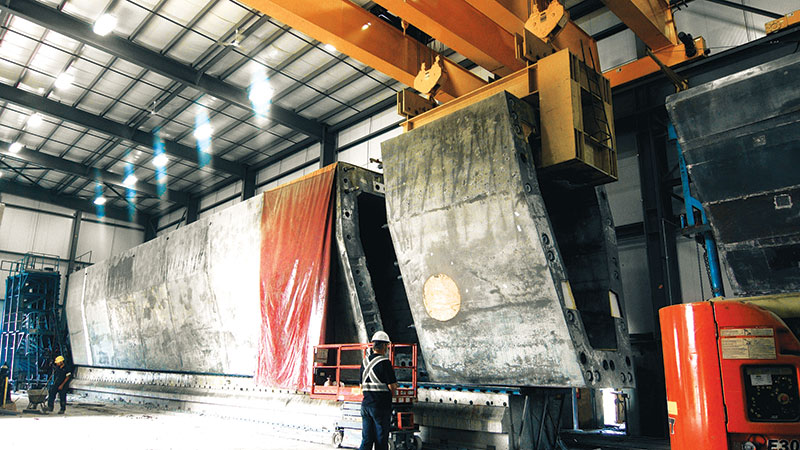 Two areas of concern for the design team was the effect of ice abrasion on the bridge piers over time, and the corrosiveness of de-icing salt during winter. In response the designers specified high-strength/high-performance concrete for the segmental pre- cast concrete pier starter pieces to create built-in ice abrasion resistance. In addition, all deck precast concrete elements contain stainless steel rebar to withstand de-icing salt. Precast concrete elements were also cured in humid chambers to achieve the required durability. 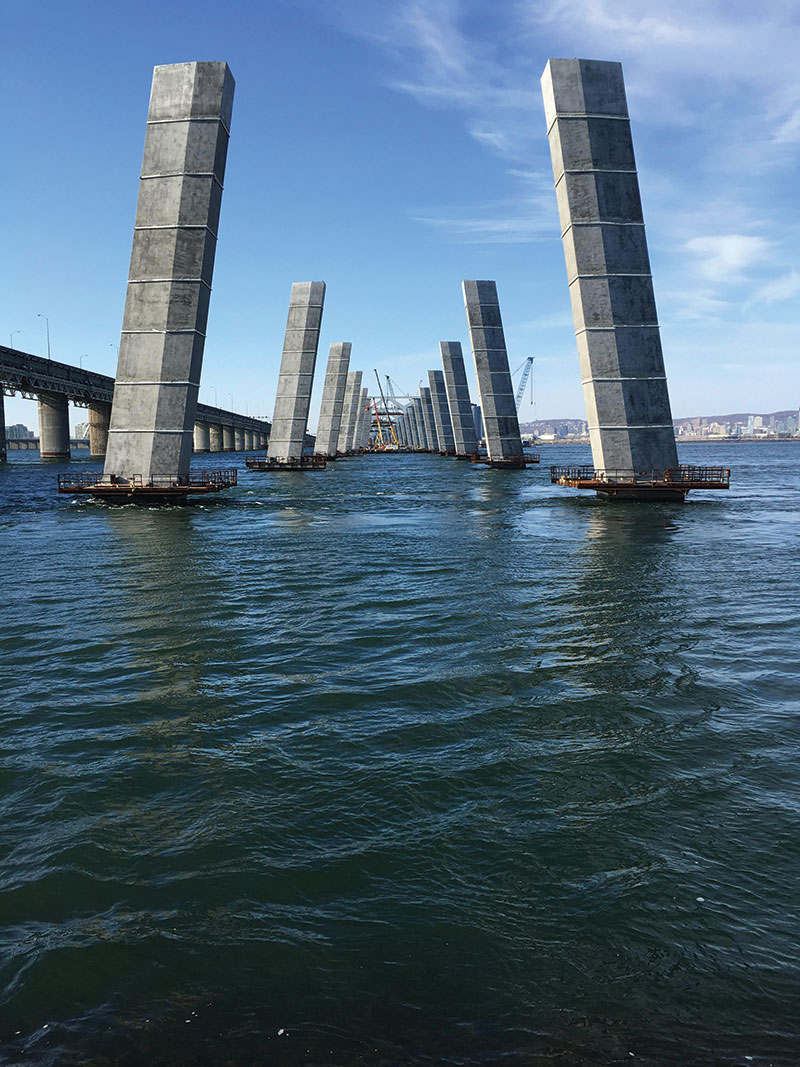 “As the project was design built, it required a lot of flexibility for our whole team,” said Robert Bouchard, CEO of BPDL. “We had six draftsmen full time during the two years dedicated to this project. We had to double our workers and triple our transport teams – we are talking here of approximately 5,000 loads in a timeline of a year and a half.”

Crews installed the deck slabs at a rate of 440 panels per week and constructed the lower legs in just 36 days. The architectural panels were used for the walls of the uniquely shaped east and west abutments, the latter of which is 70 metres (231 feet) wide. 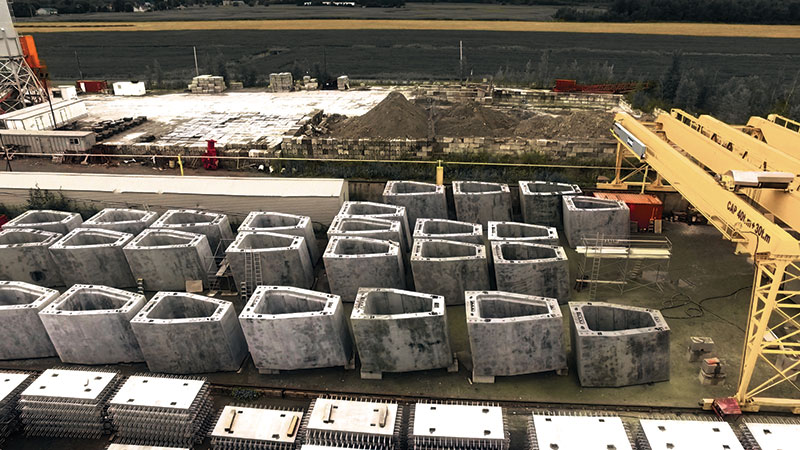 The new bridge includes two three-lane roadways, a path for pedestrians and cyclists, and accommodation for a light-rail system.

The project earned the Envision Platinum Award – the highest there is – from the Institute for Sustainable Infrastructure, the first large-scale bridge to do so in Canada, for its expected useable lifespan of 125 years, and for features such as a storm water drainage system, purchase of carbon credits to offset GHG emissions generated during construction, use of LED lighting, diversion of only one per cent of construction waste to landfill, and the restoration of marshlands in the area to compensate the loss of natural habitat at the bridge site.

Such attention given to sustainability should earn the admiration of millions of motorists, cyclists and pedestrians, along with the safety, beauty, and functionality of this new Montreal landmark.