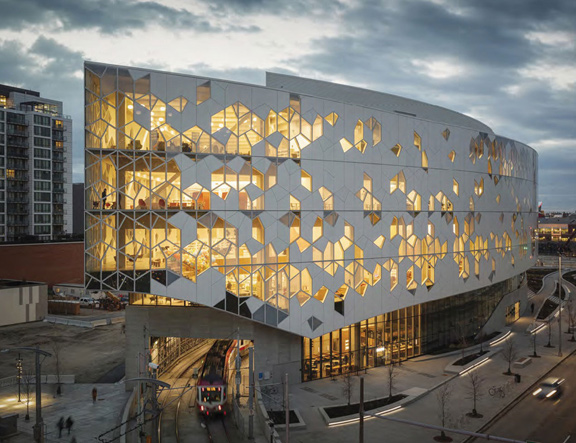 Snøhetta, the renowned Norwegian architectural firm, and DIALOG, the multi-disciplinary Canadian design firm, have designed the newly opened Calgary Central Library to signal a new chapter in the life of the city, one centered on the creation and innovation of knowledge and culture.

The largest public investment since the 1988 Olympics, the 22,300 square metre (240,000 square feet) library provides spaces for all types of people and activities: for social interaction, for studying and learning, and for quiet and introspection. It anchors one of the largest library systems in North America, where more than half of city residents have library cards, and aims to welcome over twice as many annual visitors.

The design lifts the main entry over the light rail transit line as it traverses the downtown library site from above to below ground. Gently terraced slopes rise up to the building, allowing for people arriving from every direction to interact with the library. Outdoor amphitheatres nestled into the terraces provide places for people to sit and for library programs to spill outside. The entry plaza acts as a bridge between the downtown and East Village neighbourhoods and re-establishes visual and pedestrian connections across the site.

The building’s curved surface consists of a triple-glazed façade in alternating panels of fritted glass and occasional iridescent aluminum that form a modular, hexagonal pattern. Parts of the pattern might resemble an open book, snowflake images, or interlocking houses, anchoring the ideas of the collective and community.  By enclosing the entire building in the same pattern, all sides function as the “front” of the building. This visual vocabulary continues inside in the design of the new visual identity and signage, unifying the library’s goals of inclusivity.

The façade is carved away to reveal a large wood archway, a reference to the Chinook cloud arches common to the region, that visually reduces the scale of the building and embraces visitors as they approach.

As the archway continues into the lobby and atrium, the wood spirals upwards over 85 feet to a view of the sky through the oculus. The open atrium, finished with wood slats, helps people quickly grasp the circulation and organization of the interior. The rhythm of the exposed concrete beam and column structure inside is reminiscent of a stoa, the public, open-air colonnades of ancient Greek architecture that doubled as spaces of gathering and intellectual exchange. 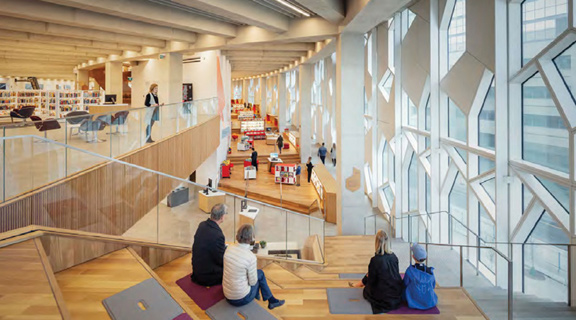 The livelier public activity areas on the lower floors gradually transition to quieter study areas on the upper levels. At the street level, multi-purpose rooms around the perimeter of the building help enhance the connectivity between inside and outside.

At the northernmost point of the library, the ‘Living Room’ overlooks the train line. Filled with light and activity, this prow of the building beckons those outside to enter, and makes a fitting vantage point to observe the impact of a building that hopes to re-energize the spirit of culture, learning, and community in Calgary.

DIALOG is a design firm with offices in Vancouver, Edmonton, Calgary, Toronto and San Francisco.

The role of precast concrete
Lafarge Calgary Precast supplied precast concrete in the form of architectural panels and landscape elements. Beginning in 2014, Lafarge worked collaboratively with the design team for the conceptual design of the panels, and brought in US Formliner to work with the architects to provide a wood plank pattern finish. 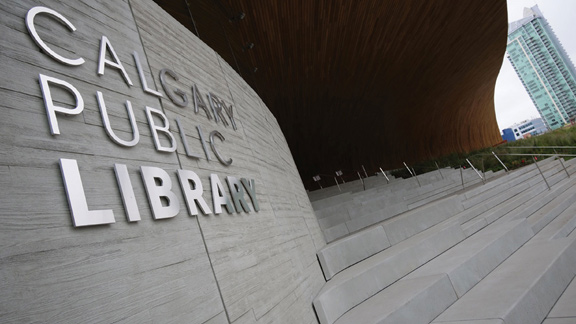 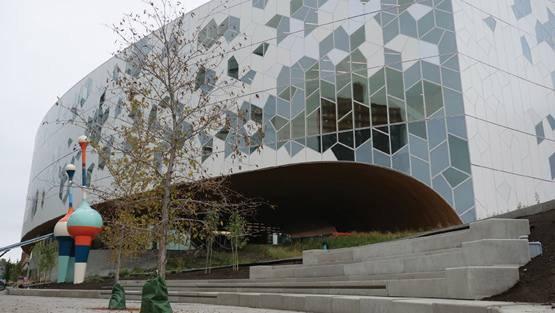