P.S. 62 is the first net zero energy school in New York City and one of the first of its kind worldwide. Also known as the Kathleen Grimm School for Leadership and Sustainability, the building is a 68,000-square-foot, two-storey school serving 444 pre-kindergarten through fifth grade students. The cutting-edge structure harvests as much energy from renewable on-site sources as it uses on an annual basis. 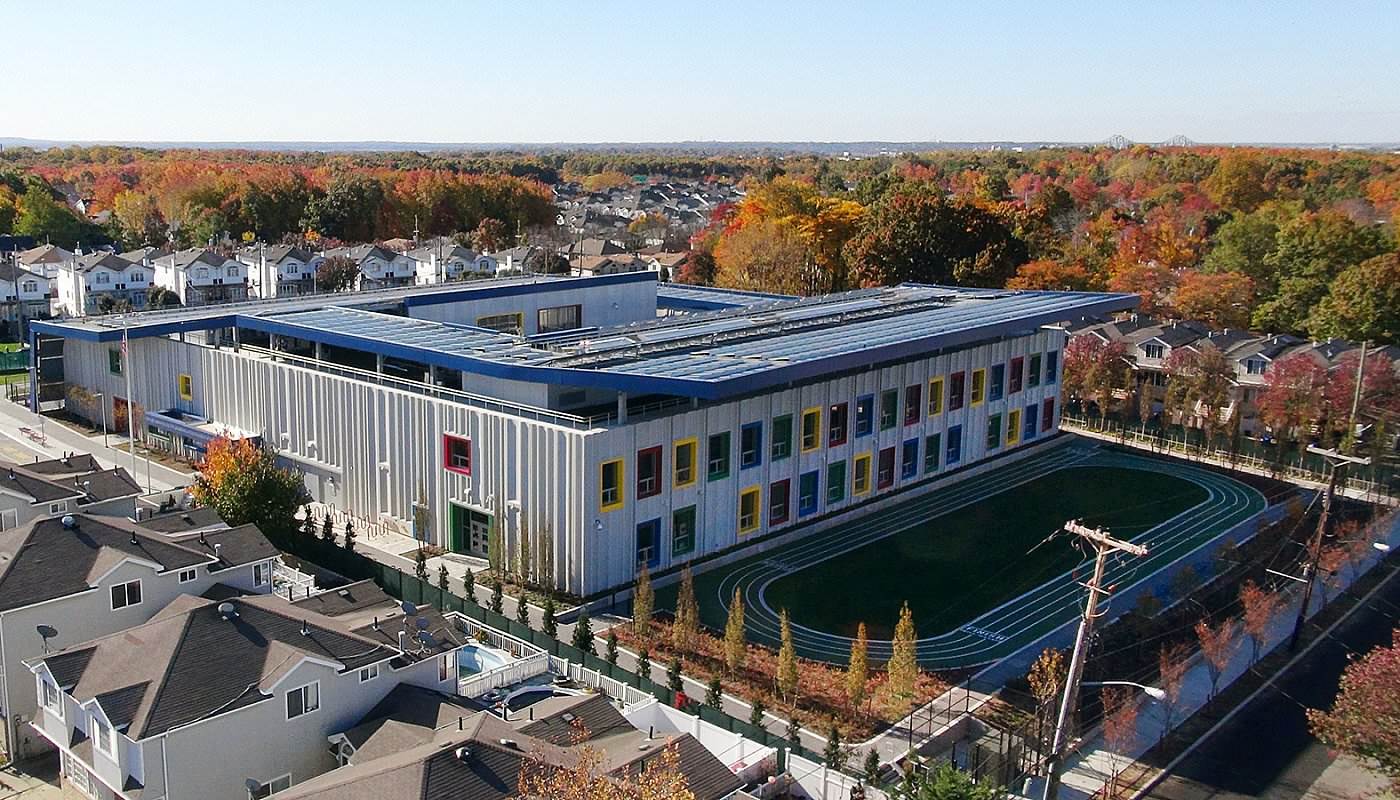 Designed to comply with the SCA Green Schools Guide in lieu of LEED®certification, the project is the NYC School Construction Authority’s first “sustainability lab.” One of the sustainable and low-energy features incorporated in this design by architects Skidmore, Owings and Merrill LLP (SOM) includes an ultra-tight high-performance building envelope. The precast building facade acts as a rain screen system, and underground tanks are designed to collect rainwater.

Achieving net zero energy is about limiting energy loss. In order to provide the tightest seal possible, the 30-foot-tall precast concrete panels span from the foundation to the roof without any intermediate connection to the structure. This design avoided penetration of the building’s insulation and vapor barrier, thus providing as airtight a building enclosure as possible. 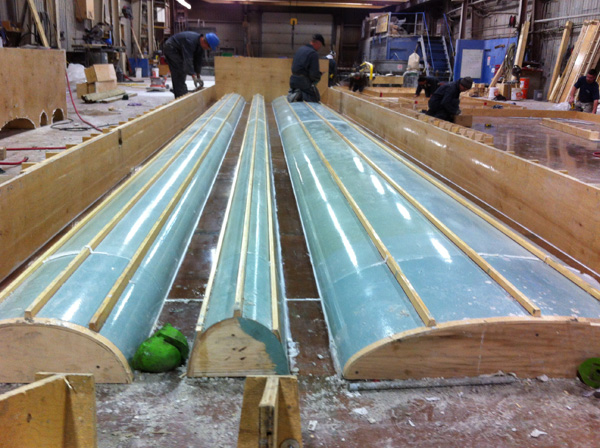 The architects chose various shapes and volumes of precast to create a unique “ribs” aspect, which they enhanced afterward with triple-glazed windows in brightly coloured frames. The irregularly undulating pattern was used to break up the building’s aesthetic mass. Although the panels are tall, the fact that they are pleated gives them a scale and texture that appeals to children as well as adults.

The project required 162 precast concrete panels, for an average weight of 18,000 pounds and an average area of 34,500 square feet. BPDL, the precast supplier, used one mix design for concrete, using both grey and white cement, with heavy sandblast to reveal the aggregates for a natural stone look. As the design required elliptic shapes, special mould elements were used to give the “pleated” aspect; those elements had to be designed in such a way that they could be easily adapted from one mould to another for economy of cost, while maintaining the interesting design.

A local subcontractor was hired to look after the installation of the panels, but an inspection team member or the precast supplier was on site daily to ensure proper installation practices were being used. 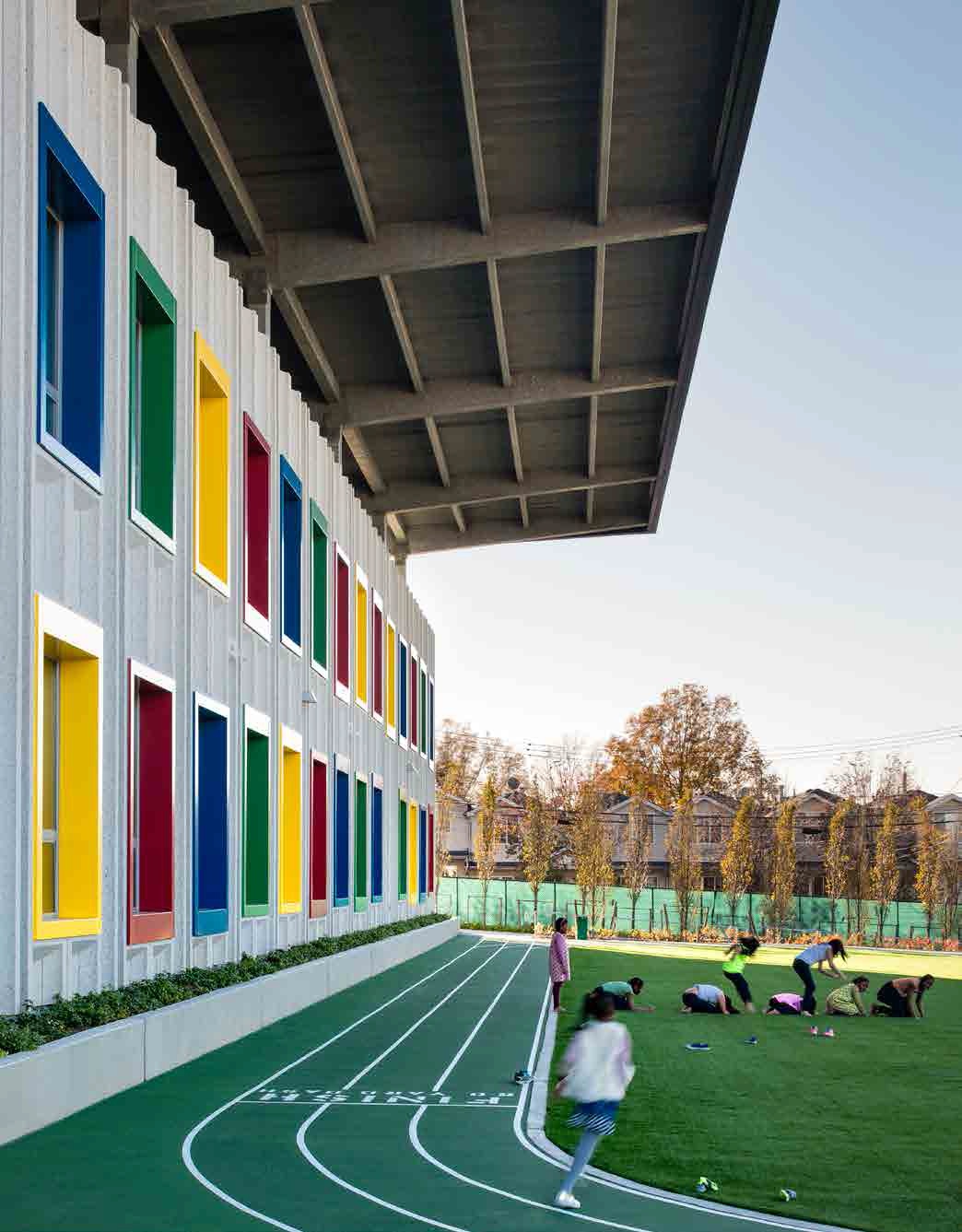 SOM optimized the orientation and massing of the courtyard-shaped building to take advantage of sunlight for both ample daylighting and photovoltaic arrays on the roof and south facade. Other sustainable and low-energy features incorporated in the design include an ultra-tight high-performance building envelope, daylit offset corridors, energy-efficient lighting fixtures, low-energy kitchen equipment, a greenhouse and vegetable garden, a geo-exchange system, energy recovery ventilators and demand-control ventilation, and a solar thermal system for hot water.