The Humber River Hospital has gone from a hospital constrained by the limitations of aging technology and building infrastructure to North America’s first fully digital hospital. The new Humber River Hospital, which opened in October 2015, uses the most current technologies to enhance all aspects of quality patient care delivery, improving efficiency, accuracy, reliability and safety. At 167,000 square metres [1.8 million square feet] of space, it is the largest acute care hospital in the Greater Toronto Area. 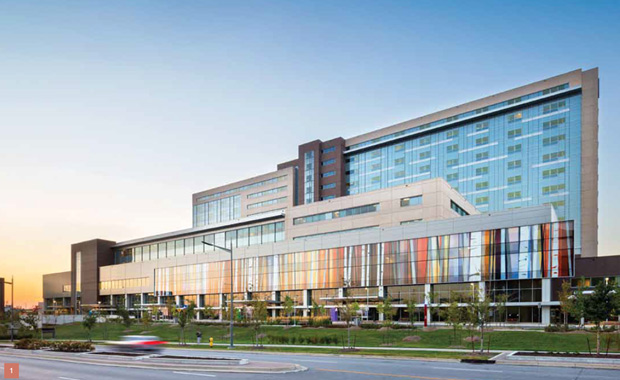 Solving Design Challenges
The building is comprised of three simple components reflecting the hospital’s essential functions: ambulatory block; diagnostic and treatment podium; and inpatient tower. The architecture of these forms takes inspiration from the architecture of Toronto, following clean rectilinear lines. As the exterior palette of materials was developed, precast concrete was envisioned from an early stage of the design to provide a solid and durable material to help accentuate the overall goals of the hospital.

Because the building is a tangible symbol of the new Humber River Hospital, it needed to project a contemporary image. HDR’s designers composed a façade using precast concrete panels with two finishes to help accentuate the articulation of window openings and feature a strong system of reveals relating to the curtainwall fenestration pattern. This pattern also symbolically mimics the rock out-croppings lining the banks of the Humber River. The reveals within the panels echo the movement of the river moving over the river’s rocks.

Precast concrete defines the mass of the inpatient tower and provides the curtainwall used on north and south sides of the tower a definitive termination point. Overall, the building uses 12,000 square metres [130,000 square feet] of precast concrete as a part of its 33,400 square metres [360,000 square foot] exterior envelope. The project also includes two precast concrete parkade structures providing 2,025 parking spaces for patients, visitors and staff. An important element of the design was to provide a unified palette of materials and to tie the parkade structures to the hospital.

Function follows Aesthetics
The use of precast concrete panels on the Humber River Hospital was based not only on their aesthetic capabilities, but also the ability to support the rigorous functional requirements of the design including sound transmission, thermal efficiency, durability and ease of construction. 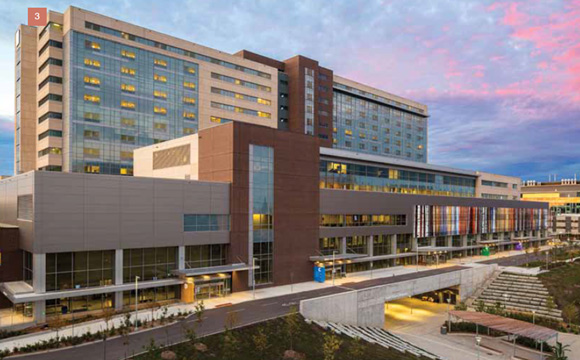 Technical Aspects of the Design
The design of the envelope employs precast concrete panels bearing on the slab edge of the cast-in-place concrete structure. The panels provide the exterior finish component of a standard cavity wall assembly utilizing an insulated, metal stud back-up wall on the inside. The precast concrete panel wall system provides traditional rainscreen performance which allows for the removal of moisture from the cavity wall via internal flashing and a series of weeps at horizontal joints.