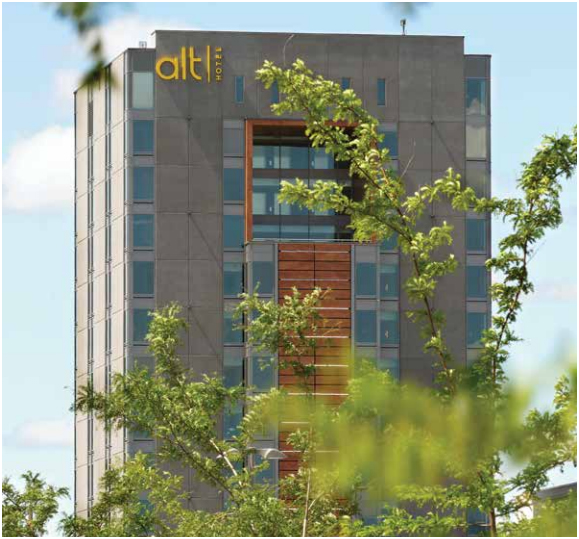 Groupe Germain Hospitalité's ALT Hotels are carving out their niche in Canada's hospitality sector. Catering to the needs and whims of the modern-day traveler, their arrival in select Canadian cities – including a coveted Toronto airport location – is attracting praise from both guests and industry watchers alike. Many are fans of their “cheap chic” approach to hotel services and innovative design. Lending to ALT Hotels' popularity is the use of precast concrete, which has been incorporated to help a handful of Canadian locations achieve their durable and trendsetting appearance. For the recently opened ALT Hotel next to the Halifax Stanfield international Airport for instance, Andrew LeVatte with Strescon Limited says precast concrete was selected to pull off the building's sleek, dark exterior. “Imported black granite sand along with five-per-cent charcoal pigment was used in the architectural precast concrete panels creating the rich, ultra-modern look the owners were hoping to achieve,” he notes. 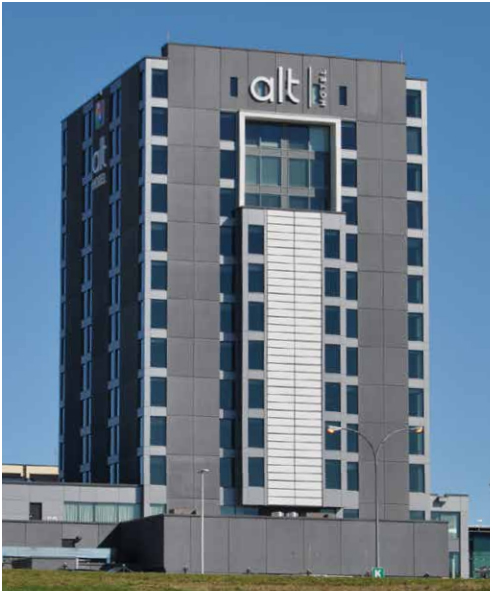 Strescon provided 2,972 square metres (32,000 square feet) of architectural precast concrete for the 169-room hotel, which became the first of its kind for the ALT Hotels brand in the Maritimes and the fourth location in Canada when it opened in June 2013. Designed by LEMAYMICHAUD Architecture Design and developed under general contractor Marco Maritimes Limited, the structure is comprised of 213 pieces of precast concrete, all of which were installed in 2012.

Precast concrete also helped the ALT Hotels chain make a lasting impression in Brossard, Quebec. In 2007, the chain cut the ribbon to a new location on boulevard de Rome boasting the brand's trademark minimalist style, as envisioned once again by LEMAYMICHAUD. Dubbed the ALT Hotel Quartier Dix30, the 14-storey hospitality facility encompasses 158 rooms, ample event space, a spa, and other traveler and business amenities. Outside, it sports a slick and understated facade, making it a natural fixture in Brossard's trendy L section. 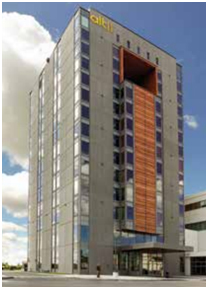 Quebec-based Armtec provided 130 panels for the hotel's construction. Says Stéphane Martel, director of engineering at Armtec, developers selected precast concrete for the material's inherent durability and flexibility. “(Precast concrete) fit well with what the architect wanted to do. It also helped the project move at a quick pace because all of the panels were precast ahead of time so they could move fairly quickly toward building and enclosing the hotel, so that crews could start early on the finishing work inside,” explains Martel.

Combining chic design, modern amenities, and eco-friendly features, ALT Hotels is becoming a favourite destination among trendy travelers and an eye-catching addition to the hospitality scene in cities across Canada. What's more, with materials from suppliers like Strescon and Armtec, the hotels also stand as highly visible monuments to the precast concrete industry.