Combine its internationally known historic sites, such as the Louisbourg Fortress, Alexander Graham Bell Museum, and the Cape Breton Miners Museum, with the rugged beauty of the Highlands and a plethora of other highlights around the island, it’s little wonder that Cape Breton has seen a steady rise in tourism and a steady increase in cruise ships year after year. 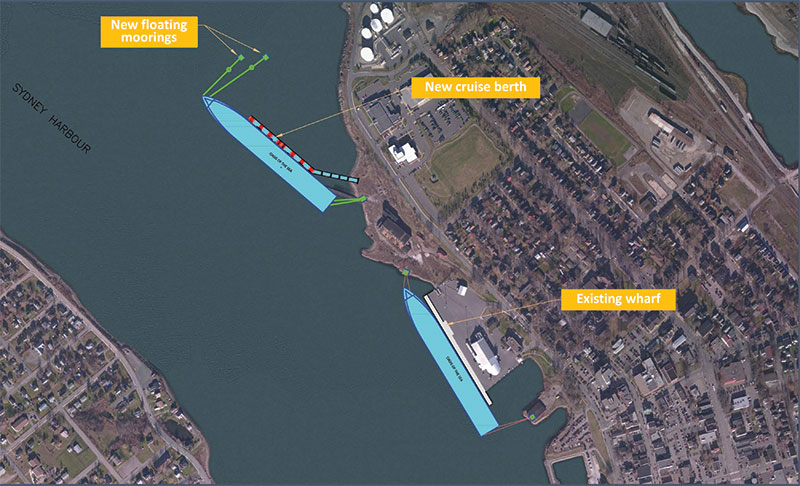 In 2016 a total of 54 cruise ships and 120,000 passengers and crew visited the port. This year more than 110 cruise ships, with more than 200,000 passengers and crew will visit the Port of Sydney. This growth has driven a need for an additional berth at the Sydney Marine Terminal to accommodate not only the increasing number of ships, but also the large size of these vessels. 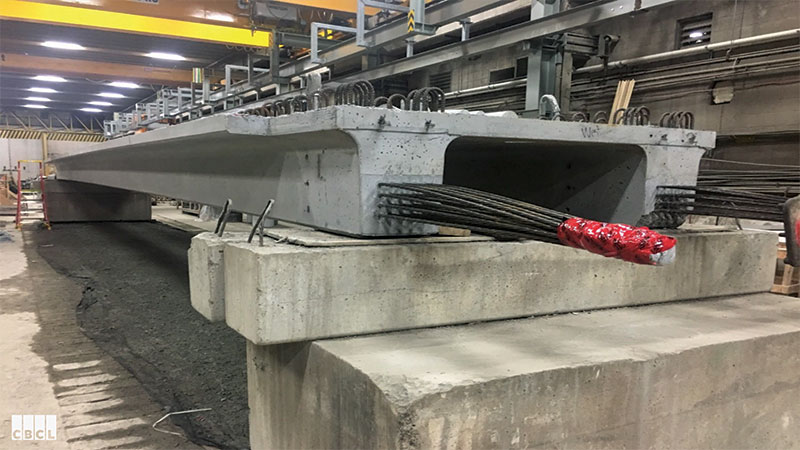 With only one berth that can accommodate vessels up to approximately 315 metres LOA (Length Over All), The Cape Breton Regional Municipality, in collaboration with the Port of Sydney Development Corporation, commissioned a study on the viability of building a second Sydney cruise ship terminal.
In September of 2018, after more than a decade of planning, construction of the second cruise berth began with the award of an $18 million contract to Zutphen Contractors of Mabou, Cape Breton. The new terminal just north of the existing terminal will accommodate Oasis of the Seas-class cruise ships, which are 362 metres (1,187 feet) LOA and have a beam of 60.5 metres (198 feet).

After much study of the site conditions, a steel pile foundation was chosen to support seven breasting dolphins, five intermediate bents, and one landside abutment. A breasting dolphin is an isolated marine structure which assists in the berthing of vessels by taking up some berthing loads. 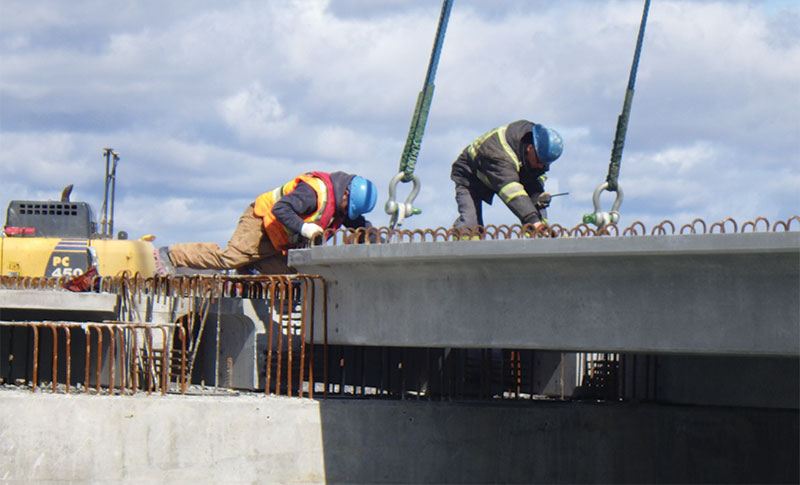 Precast North East Extreme Tee (NEXT) beam girders were selected to bridge the 18.1 to 21.5 metre (59 to 70 feet) spans, support the deck and transfer loads. In total, the project includes 33 NEXT beams, each with a width of 2,500 millimetres (8.2 feet) and a nominal depth of 600 millimetres (2 feet).
A conventional construction approach for wharves typically uses cast-in-place concrete for he beams and deck. The use of the precast concrete NEXT beams in this project allowed for the beams and bottom portion of the deck to be placed in one sequence. This completely eliminated the need for formwork and temporary support piles.

The use of precast concrete also allowed the units to be cast in the winter in an indoor environment under ideal conditions. Equally as important, significant portions of the structure could be constructed in parallel, thus reducing the project schedule. Casting the deck spans on site would have extended the schedule and resulted in a significant amount of concrete work in harsh winter conditions. 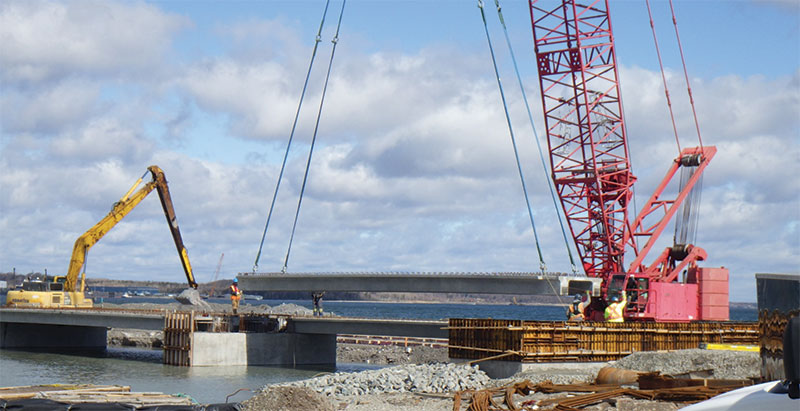 One particular challenge was the loads induced on the structure by waves and ice. Typical gravity loads on bridge-type structures create positive moments at mid-span and negative moments over supports. Wave and ice loads create upward forces and a design solution was needed to resist these loads in nonconventional ways. 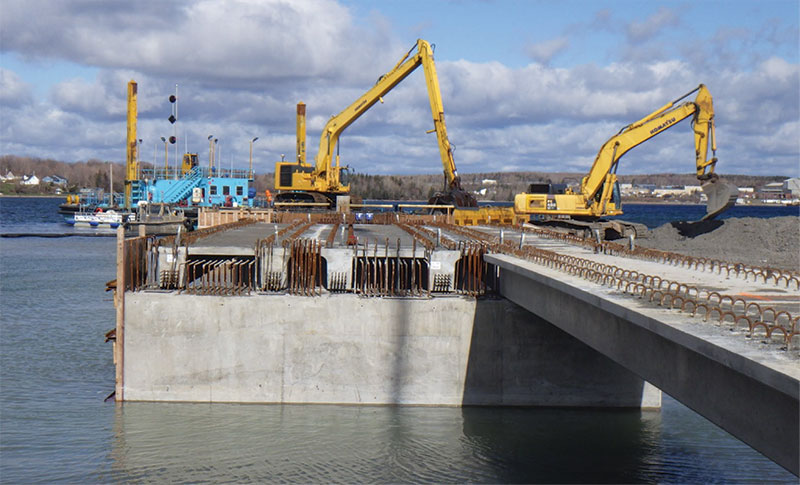 Engineers at CBCL worked closely with the precast concrete supplier Strescon Limited of Bedford, NS to determine limitations of strand lengths protruding from the end of the girders. In order to develop the ice-induced positive moment into the supports, a strand anchorage system of steel plates, dead-end strand chucks and nelson studs were embedded into the supporting concrete.

The project is now well advanced with 77 of 83 piles installed. The project concrete components are substantially complete with the abutment and all intermediate supports installed. As well, six of the seven breasting dolphins are constructed, 24 of the 33 NEXT beams are in place and approximately half of the concrete deck has been placed. Project completion is expected at the end of 2019, ready for the 2020 cruise ship season. 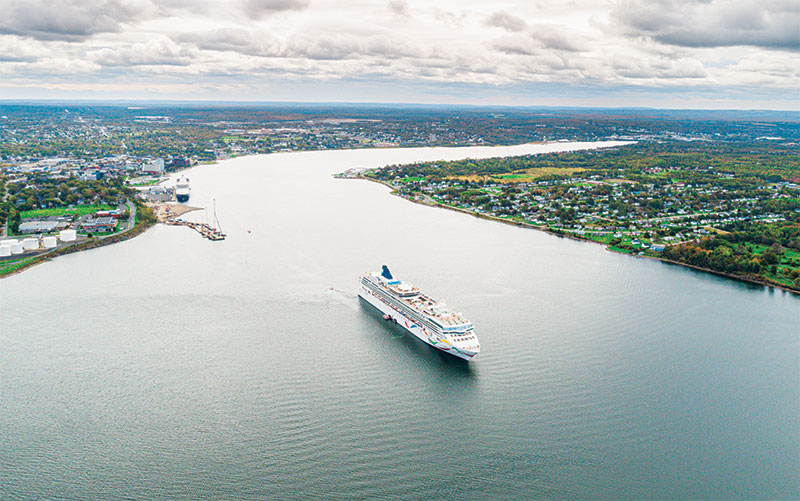 The dedication and ingenuity of the engineers and designers involved was a key factor in developing a design that allowed the use of precast concrete NEXT beams in a unique application.

CBCL would like to acknowledge the contributions of Xi Chen, EIT, Colin Jim, P.Eng, Kori MacPherson, P.Eng, Arron Kennedy, P.Eng, and Greg Peters, P.Eng. Their efforts were key in the design and the ultimate success of the project.

For years the typical design of a short to medium span bridge involved the use of adjacent precast concrete box beams. At 1.2 metres (4 feet) wide, it would take eight box girders to make a typical 10-metre (33 feet) wide bridge. The hollowcore of the box beam makes it difficult to manufacture. Installation was also difficult due to alignment of the transverse post-tensioning ducting plus grouting procedures involving the shear key.

In 2006, the technical committee of the Northeast Chapter (New England states and New York State) of the US-based Precast Concrete Institute (PCI), saw a need to revisit the design of short to medium span bridges. Through consultation with the technical committee members, the North East Extreme Tee (NEXT) beam shape was born. Easier to manufacture and install, the shape is a beefier Double Tee, 3.6 metres (12 feet) wide by 0.9 metres (3 feet) deep with stems just over 330 to 381millmetres (1.08 to 1.25 feet) wide that can handle spans from 13.7 metres to 27.4 metres (45 to 90 feet).