The three Luxenbourg condominiums in Quebec City are each of five storeys, and 8,400 square metres [90,000 square feet]. The challenge with this project was to have a slim-floor structure with long spans to facilitate two levels of underground parking. The developer, Logisbourg, also wished to have the building finished quickly to generate revenue earlier than a conventional construction system normally allows.

All three condos use the DeltaBeam Frame System by the Finnish-based company Peikko Group. The system consists of hollow trapezoidal-shaped beams and steel columns filled with concrete. “Peikko solved many of our design concerns,’’ explains Claude Fugère of Fugère Architectes. “Our first challenge was floor depth: we were limited in height and needed a shallow floor assembly. We worked with a 250-millimetre thick [10 inches] precast concrete hollowcore floor slab provided by producer Stubbe’s Precast and DeltaBeam assembly, with a typical bay size of 8m x 11m [26 feet x 36 feet]. The long spans allowed for four parking stalls between each column while the shallow assembly allowed for minimum building height.’’ Using DeltaBeam as edge beams around the perimeter of each floor also allowed for convenient curtainwall fastening. 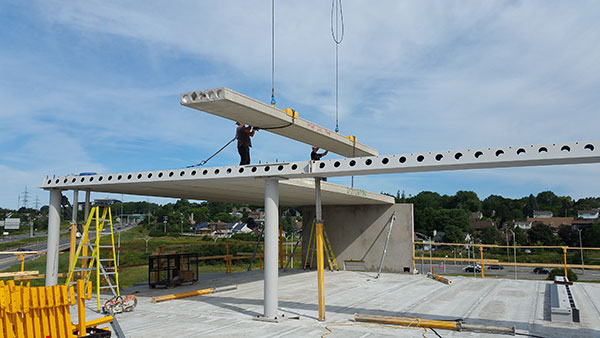 A short narrow cavity at the end of each hollowcore floor slab contains two pieces of rebar which extend through to the DeltaBeam and are held in place with poured concrete to make the connection between floor slab and beam.

“Column size was another concern,’’ says Fugère. “We wanted the smallest, fire-rated columns to minimize their effect on our interiors’’. Peikko Composite Columns varied in size from 250-millimetre [10 inches] diameter on the perimeter columns to 400-millimetre [16 inches] diameter for columns inside the building, making them smaller than poured concrete columns or steel columns wrapped with drywall. 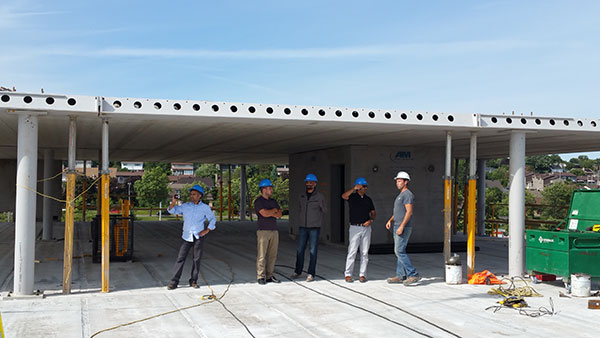 In addition to the DeltaBeam, the newest Luxenbourg III condo, also used a technology called SlenderWall®, an advanced precast concrete wall system. SlenderWall® is a proprietary precast concrete and steel stud wall system designed to reduce costs on building foundations and structure requirements, shipping and installations. This integrated building envelope system offers limitless architectural solutions including plant-insulated panels with plant-installed windows. Precast Concrete Producer, BPDL, was able to replicate the same type of architectural precast thin brick that was used for buildings I and II by using the SlenderWall® technology.

The construction of Luxenbourg condo III was completed in late spring of 2017. Logisbourg has plans to build three more buildings on the same site. 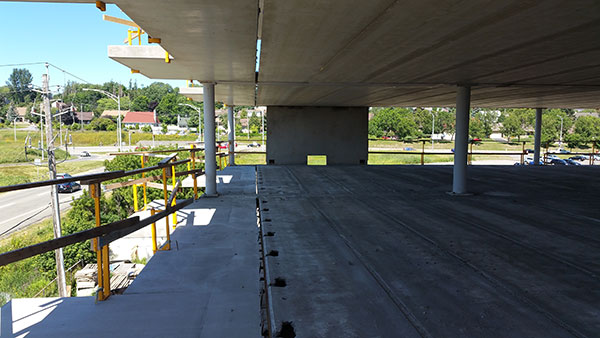 As with any multi-family residential project, minimizing thermal bridging at the balconies posed a challenge. Logisbourg was looking for balconies that would cantilever outside of the building so that occupants would have a full 180-degree view.

The solution consists of a “T” shaped solid prestressed concrete slab for each balcony of 1.8 metres [6 feet] wide with a 0.9 metre [3 feet] cantilever. To minimize the thermal bridge, urethane foam was sprayed between the balcony slab and the floor slab, and on the underside of that part of the balcony slab within the interior living space. The corresponding top surface of the balcony slab is covered with a hydronic radiant floor heating system. 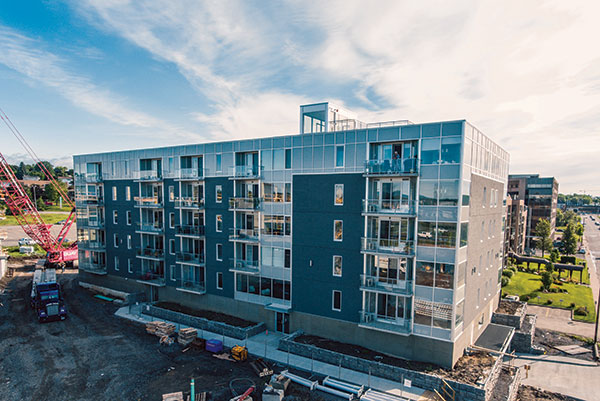 ‘’Our primary objective with the structure was to have a system that would go up quickly,’’ said Jean-Simon Généreux, project manager for Logisbourg. “With the Peikko Frame, we were able to build at a rate of one floor of 1,115 square metres [12,000 square feet] every three to four days. ’’

The installation sequence was as follows:

The fire-resistance rating for the floor system can be up to 4 hours, and 2 hours for the columns without fireproofing. The subsequent floor can be installed immediately after the grouting of the floor is done.

Using the DeltaBeam Frame System, Logisbourg succeeded in completing each structure from start to finish in about nine months for a cost of $22.37 per square foot for the DeltaBeam system, all precast concrete components, concrete topping, and erection.