It was not the easiest of construction projects. The winter of 2013-14 was one of the coldest on record in Quebec. It was so cold, in fact, that on many days doing any work at all proved impossible. Even on days where cold wasn’t a factor, high winds shut down crane operation on several occasions. 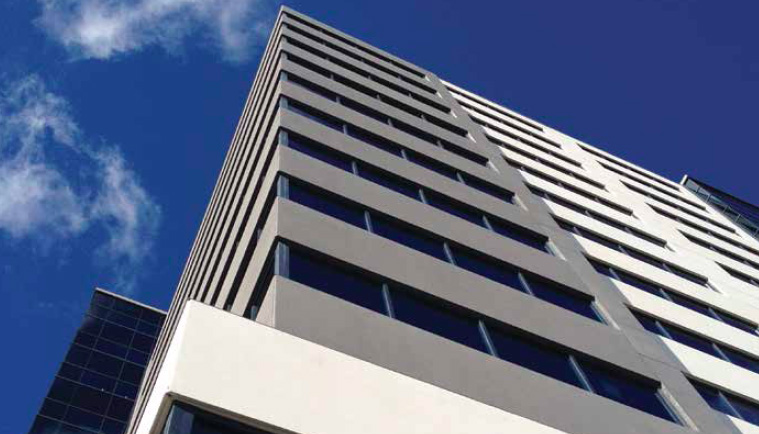 A total of 475 panels were installed for an area of 4,550 square metres. This was managed with an average erection speed of 13 panels per day, in spite of the challenging weather.

Conditions also played a part in the installation technique of the panels, with some of the work left for the spring when the conditions were warmer. “The weather was so cold that we were not able to complete the caulking at the time of installation,” explains Armtec’s Daniel Baril, “so we had to stick an adhesive membrane to the back of the panels at the joints, and then shoot the urethane into the back of the panels. Then, we had to come back when the weather warmed up in the spring to apply the caulking.”

The use of a unique colour combination of concrete in the panels – white and dark grey and finished with a light sand blast – came with its own learning curve, at the fabrication stage. “In some of the panels,” details Baril, “we had to pour both of the colours into the same form. For example, for the white sections, we had to pour the concrete into the forms, and then when that concrete was hardened up a bit, we removed part of the form and then poured the other colour into the same panel form.”

This was not how Armtec would normally handle this task, but in this special case it was the most economic approach. “Typically, we wouldn’t do it that way, but in this case, it meant that there were fewer panels to install in situ and that resulted in a cost saving at the end of the day,” explains Baril.

Also, he adds, Armtec benefited from learning how to fabricate a two-colour panel in this manner. The technique has now been added to its skill-set going forward.

Complex erection
Adding additional complexity to the project was the fact that the building was being erected over a two-level parking garage. This resulted in challenges in both the transport and the hanging of the precast panels. A mobile crane needed to be brought in, and underground shoring retained until all the panels were installed.

“We installed some of the panels with a mobile crane,” notes Baril, “and in order to use that, we had to keep the shoring that had been done under the ground level due to the parking facility under the structure. In order for the site to hold both the trailers that were loaded up with the panels and the crane, we had to retain that underground shoring all around the building while the panels were installed before removing it once installation was completed.” 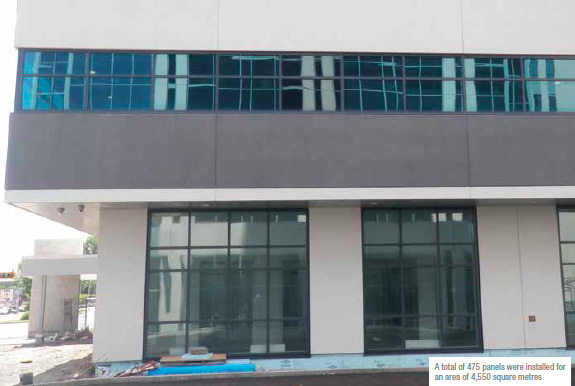 The panels also featured a distinctive, adjustable anchor connection. “First, we supplied embedded anchors,” Baril says, “then we installed the panels on the shear key with adjustable bolts to allow for adjustment of every one of the connections, which gave us an easy way to fix the panels into the correct position both vertically and horizontally. Then, once the panels were fixed into position, we welded everything into place, so at the ends of each panel were both a welded and bolted connection.”

Given the challenges, and the impressive outcome, the finished project is one that Armtec is particularly proud of. So proud, in fact, that Baril says it plans to include 5 Place Laval in an upcoming promotional brochure for the company.