Pioneer Hall, the second-oldest dormitory on the University of Minnesota campus in Minneapolis, is prominently situated on the east bank of the Mississippi River. One of four residence halls located within the UMN’s Superblock residential district, Pioneer Hall was built in the Georgian Revival style with a red brick exterior, slate roofs, central cupolas, and stone detailing. 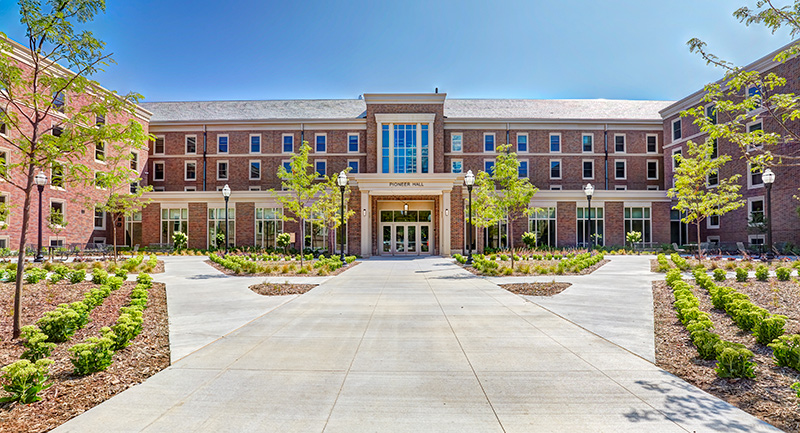 The 90-year-old dormitory, cramped and with sparse amenities, was much in need of the U.S. $104.5 million expansion and renovation. Chief among the challenges posed by the renovation was integrating the modernization of the building within its historical context and to accommodate future upgrades and social amenities.

Social engagement, through the provision of spaces where students can interact, is one of the key factors in academic success and student retention. Modifications to the Hall, therefore, would need to make the development of student community a priority while retaining the building’s characteristic elements and sense of place. The renovation project increased the number of beds from 693 on four floors to 756 beds on five floors. The dining hall expanded from 285 seats to 850 seats, large enough to serve all 2,900 Superblock residents, and is open to the public as a popular lunch destination. The building now includes community and recreational spaces as well as office and support spaces within a 23,450 square metre (252,413 square feet) footprint, more than 40 percent larger than its original size.

The renovation preserved much of the building’s Georgian Revival- style architectural detailing. Portions of the structure were demolished, while the character-defining portions of the residence hall fronting on Fulton, Harvard, Essex and Walnut streets — constituting 40 percent of the upper floor areas — were preserved and renovated. By expanding those floors toward the interior courtyards with new construction and removing all interior partitions and stairs, new residential communities are now located on each side of the widened, fully-accessible corridors. 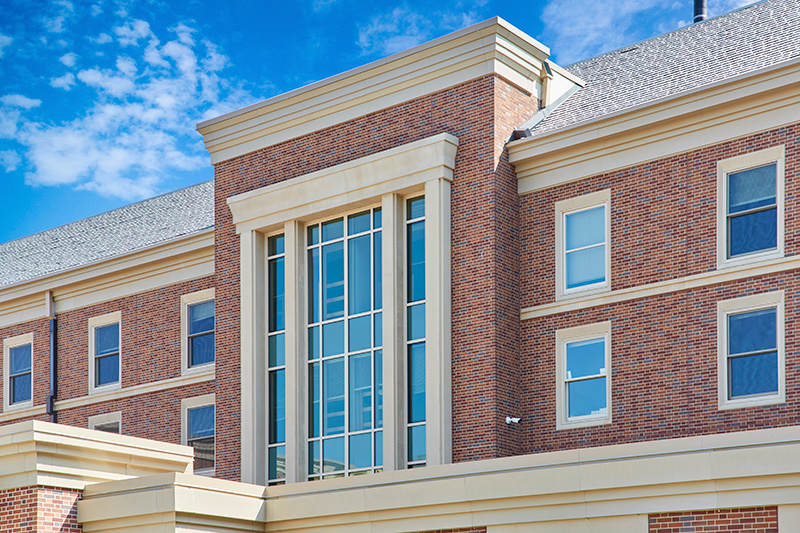 The newly constructed 850-seat dining area is located at street level beneath the new east-west center wing and extends out into the southern courtyard space defined by the existing south wings. Elevators now provide access to all floors, and all building entrances are accessible. Thanks in part to the modular construction of precast 3 concrete, the project opened on time in August 2019. 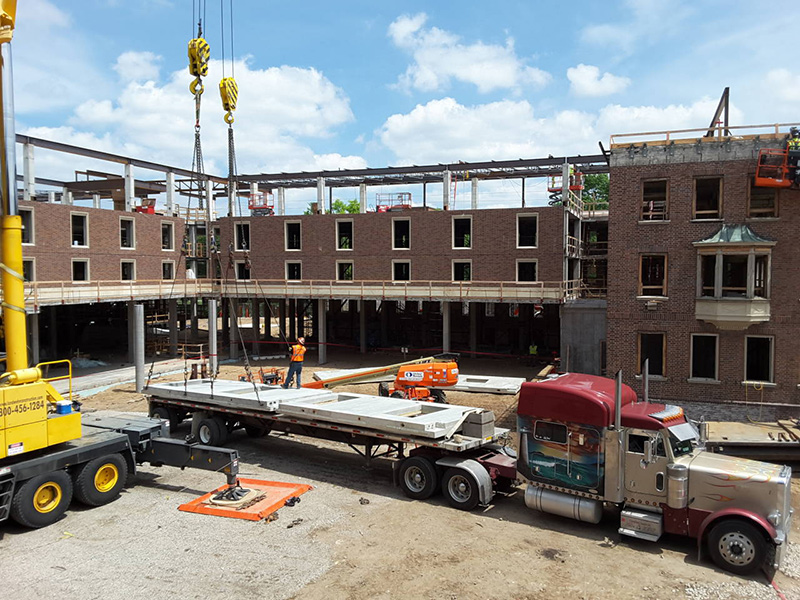 Widening the wings required extensive shoring of the floors and the remaining exterior walls. The new walls are insulated precast concrete with thin-brick and integral accent banding and window surrounds. The interior side of the walls were finished smooth for painting. Community spaces, offices, and similar areas included stud framing to accommodate electrical components.
One key to maintaining the construction schedule was the decision to construct the new sections with post-tensioned concrete tied into the old clay-tile and concrete joist floors, and hanging the precast concrete panels from the structure.

The footprint of the building was expanded in both the North and the South Courtyards. The new architectural precast concrete walls meet the existing masonry walls at eight different locations. More than 5,000 square metres (53,800 square feet) of precast concrete were produced and erected for the project, including 280, 300-millimetre thick (12-inches) architectural insulated wall panels. 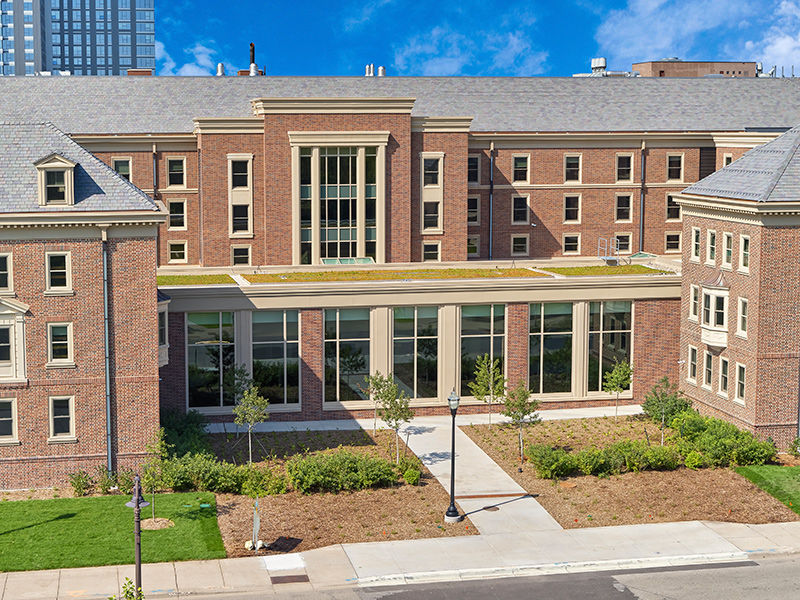 The precast concrete supplier, Wells Concrete, also worked on the west and east sides of the building, and provided precast concrete hollowcore, solid slabs, Double Tees, and beams for the floor and roof of a loading dock area.

The original building featured a Flemish bond brick with varying coursing and layout. The original punched windows were wood- trimmed with brick returns, and wood sills. Our goal was to create a complementary, but distinctly different look to acknowledge the differences between the original and the new parts of Pioneer Hall.

The challenge of matching the existing reddish-brown brick was met using an Endicott thin brick with a three-brick blend in a Flemish bond pattern. The new mortar joints in the precast concrete walls needed to match the distinctive weathered white mortar joints from 1928. 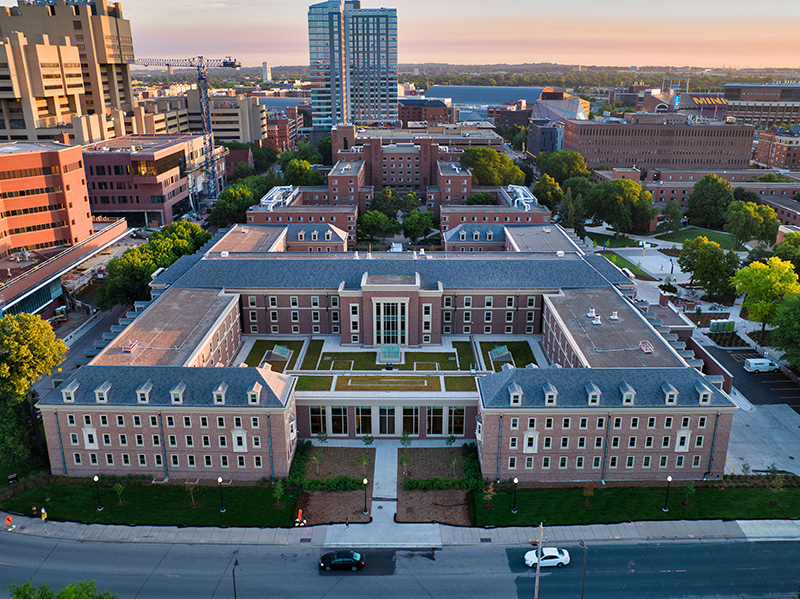 The mortar joints of the new precast concrete panels were etched to a depth that exposed the red, black, and tan sands allowing them to match the existing mortar joints. Integrating the new precast concrete panels to the existing masonry was solved by creating buff-coloured end pieces which represent the look of the downspouts on the original building. Each precast concrete wall with thin brick includes two window openings and a simplified cornice to match the style of the cornice replacements used at all of the original wall locations. To save time and cost of achieving the style match, a 3D printed mould was created in a durable, reusable material.

The architect and contractor used another 3D tool in the form of laser scanning technology – as was done on the Notre Dame Cathedral before it burned and which will assist in its reconstruction – to make a 3D model of smart data points of the existing structure. Wells Concrete used the model to establish accurate field condition joints where the new building elements met the old.

Photos by TKDA and Wells Concrete