By Jim Hanley and Dominic Cheng

Officially opened to the public in August 2017, the interchange at Macleod Trail and 162 Avenue South has become an integral part of The City of Calgary’s overall transportation network. The City’s decision to proceed with the first Diverging Diamond Interchange [DDI] in Canada followed a rigorous analysis of traffic flow, an evaluation of several designs and an extensive community engagement process.

Since completion, the DDI has alleviated congestion, increased safety and improved mobility for approximately 100,000 daily commuters, transit users, cyclists and pedestrians – all while increasing access to surrounding businesses and services.

Two bridges, South and North, carry 162 Avenue over Macleod Trail. Semi-integral abutments were used and expansion joints were eliminated to help the construction schedule. The South Bridge, spanning 32.6 metres [107 feet] and 19.7 metres [65 feet], was constructed first, adjacent to the active intersection that the DDI replaced. Built concurrently, the Basketweave Bridge is a high skew [55 degree] structure, spanning 26.4 metres [87 feet] and providing access to the Shawnessy shopping centre. These two structures were fundamental to the temporary detour interchange that operated from October 2016 through to August 2017. The North Bridge, with uneven spans of 28.9 metres [95 feet] and 19.8 metres [65 feet], was constructed last to complete the DDI. For proper clearance over Macleod Trail, bridge grades were kept low with approach grades limited to 4%.

Additionally, the North and South bridges had shallow depth NU1200 girders by employing multi-stage post-tensioning with three 12k15 ducts. Stressing of the post-tensioning tendons was conducted from the west end of the bridges, providing larger post-tensioning forces in the long spans. The post-tensioning also allowed for wider girder-to-girder spacing, while increasing the deck thickness to 250 millimetres [10 inches], and still satisfying vibration design requirements. 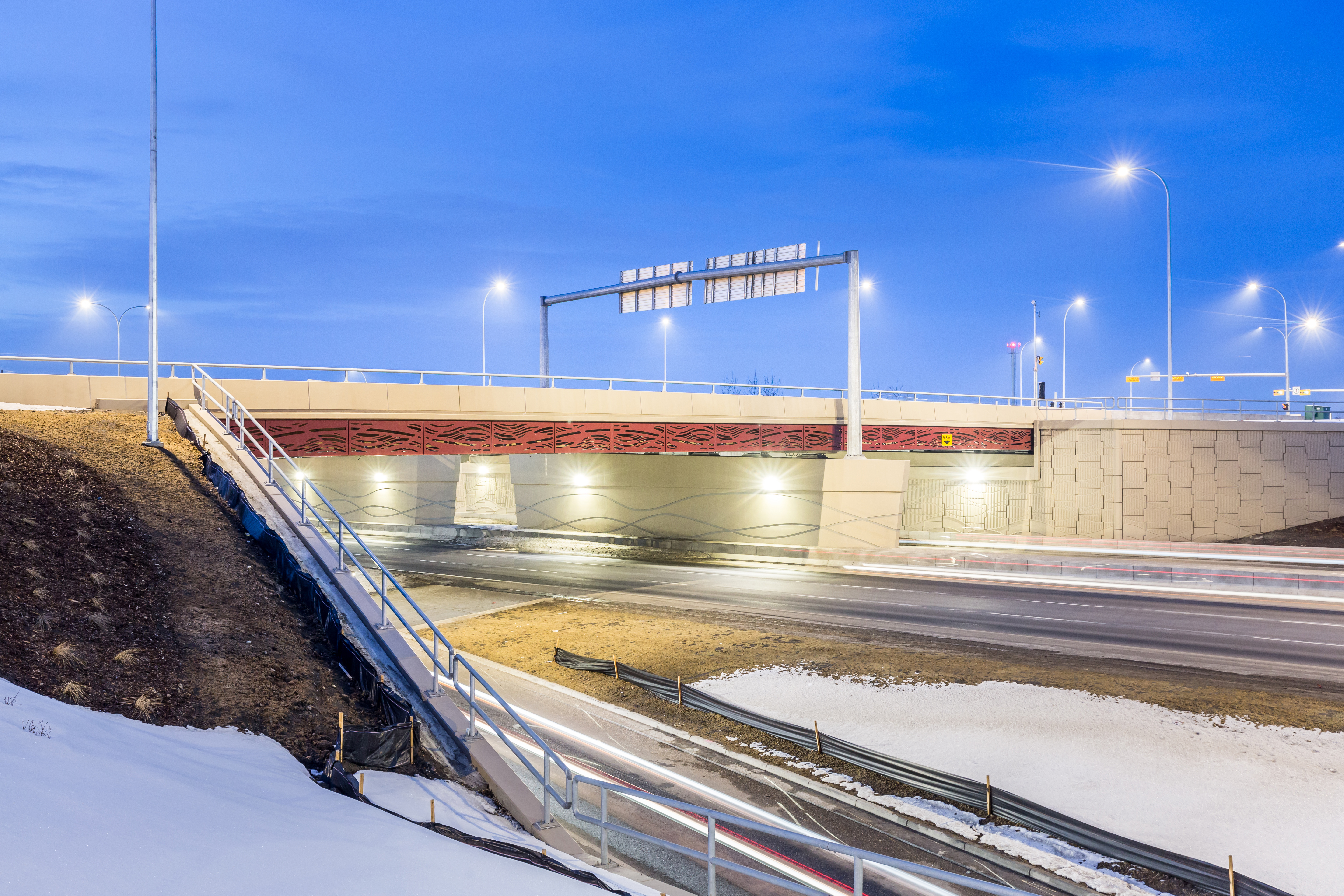 Perkins+Will were the architects on this project and were inspired to incorporate the theme of crossing waves, inherent in the DDI on the piers and MSE wall.

Jim Hanley, P.Eng. is structural manager and Dominic Cheng, P.Eng. is a transportation engineer at ISL Engineering and Land Services Ltd. in Calgary.

By James Siffledeen and Heather Adamick

The precast concrete supplier Armtec was enlisted early on to provide input on the three bridge superstructures within the pre-tender phase of the project. With such a large project scope, the general contractor and owner were faced with involving multiple suppliers or subcontractors to fulfill the bridge construction. As the precast concrete supplier of choice, Armtec also offered to take care of the coordination.
“This one-stop shop for supply, delivery, and installation created a lot of cost-efficiencies,” explained James Siffledeen, Business Development Manager with Armtec. “By dealing with only one contract, they would be reducing a lot of margin for errors and delays as well.” 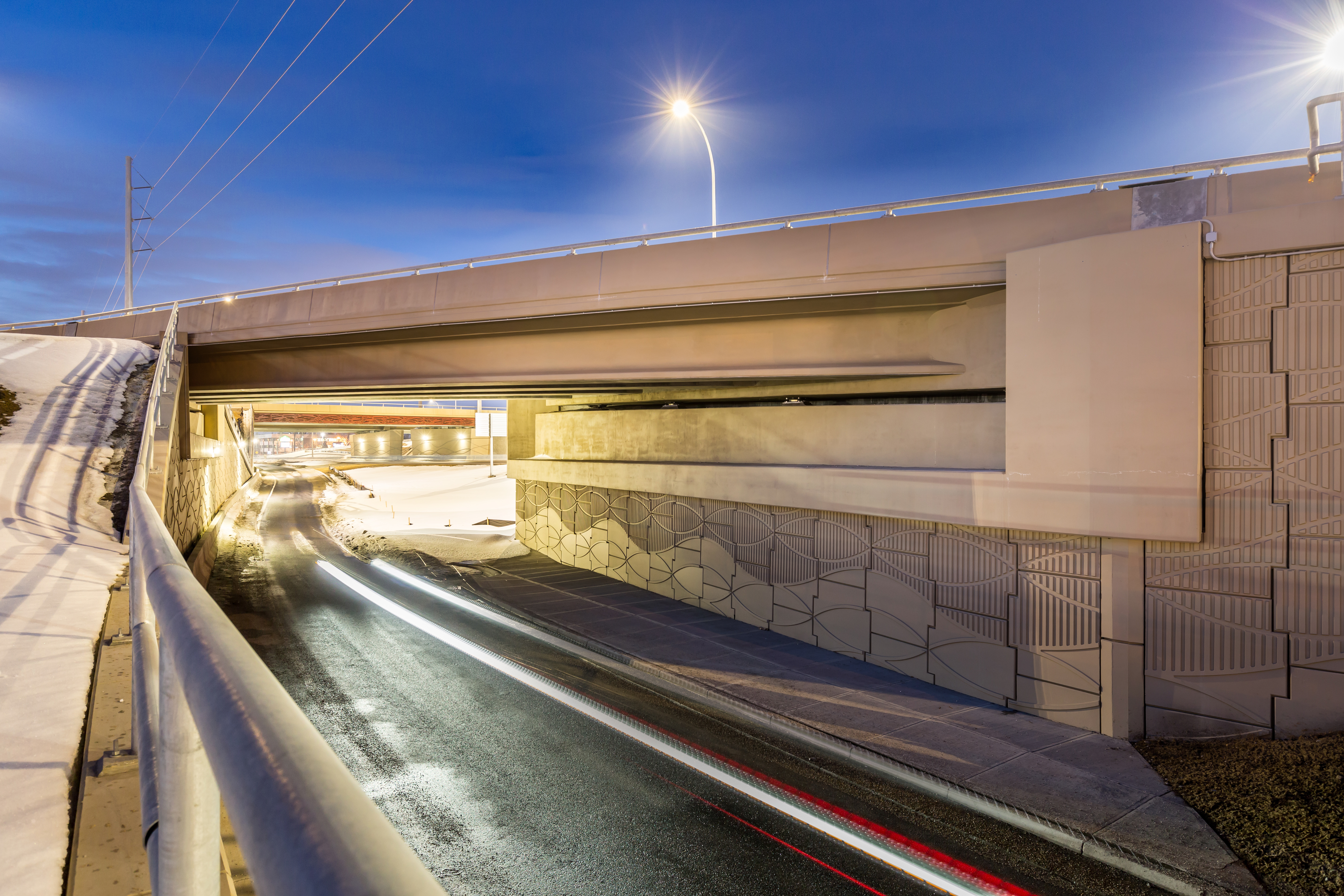 Of the four phases of the Macleod Trail Interchange, each were handled with care and sensitivity to the daily traffic. Because it was not possible to shut down such a main thoroughfare, Armtec created a delivery plan that would accommodate the limited evening windows.

Economical and efficient Mechanically Stabilized Earth retaining walls [MSE walls], commonly found on many large civil infrastructure projects, were used to stabilize the fill for the bridge abutments, and were fabricated with a variety of form-lined textures. 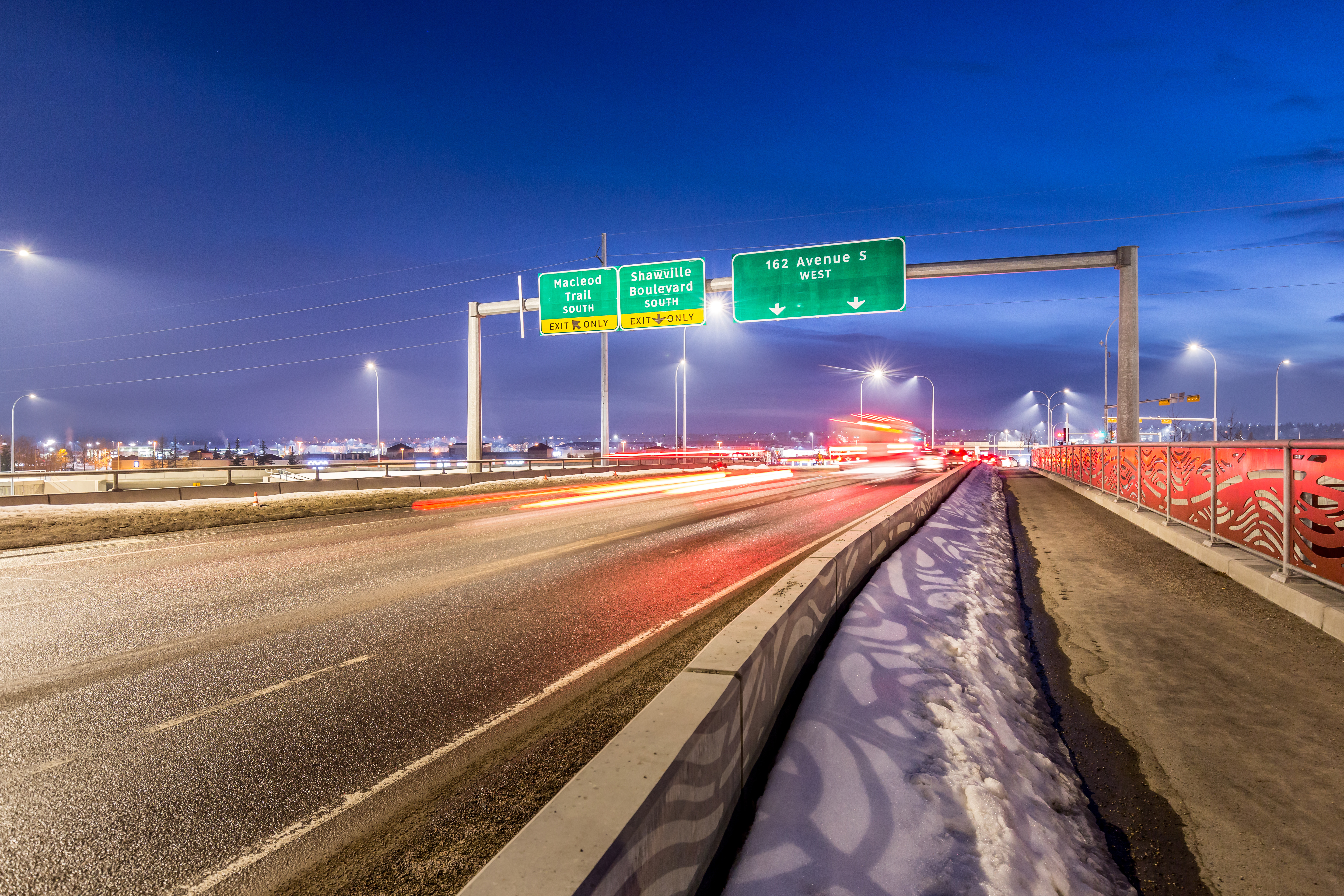 Three total bridges, including the two multi-span bridges over Macleod Trail incorporate 26 NU [University of Nebraska] I girders of precast prestressed concrete which have prestressed strands in the bottom flange. The NU Girders were pre-tensioned at the precast fabrication facility, erected on bearings in their final position, and finally post-tensioned in two stages. This design/construction method results in a bridge with a very high span-to-depth ratio and provides a highly durable superstructure free of cracks.