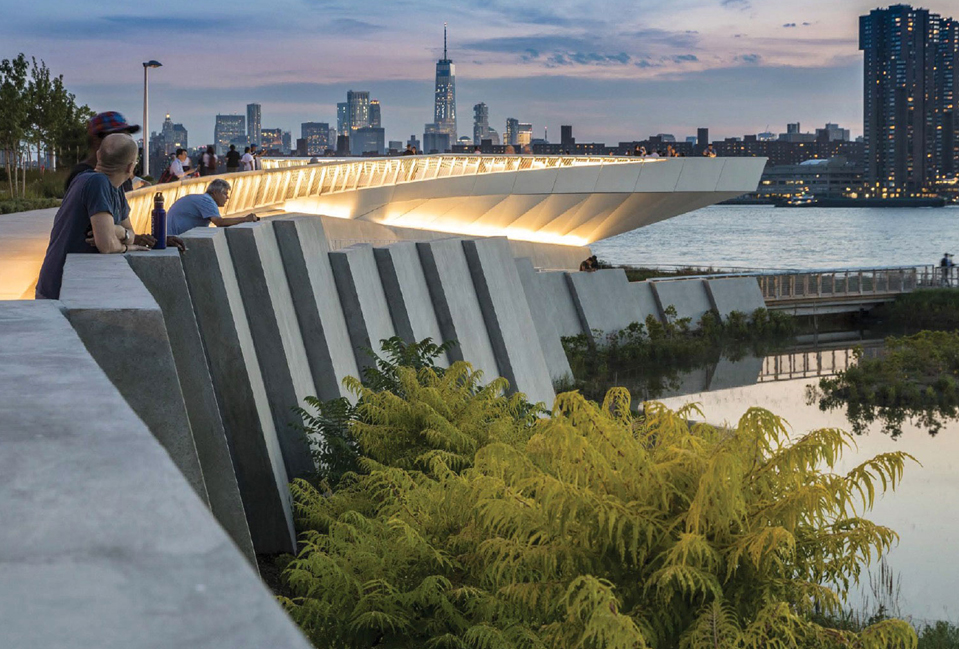 Hunter's Point South in Queens, New York was conceived as an international model of urban ecology and a world laboratory for innovative sustainable thinking.

The site is waterfront and city, gateway and sanctuary, blank slate and pentimento. These readings suggest an approach to the landscape that enhances what is unique about the site, while framing a new multi-layered identity as a recreational and cultural destination. New open spaces with connections to the surrounding communities provide access to the water's edge and spectacular views of the Manhattan skyline. 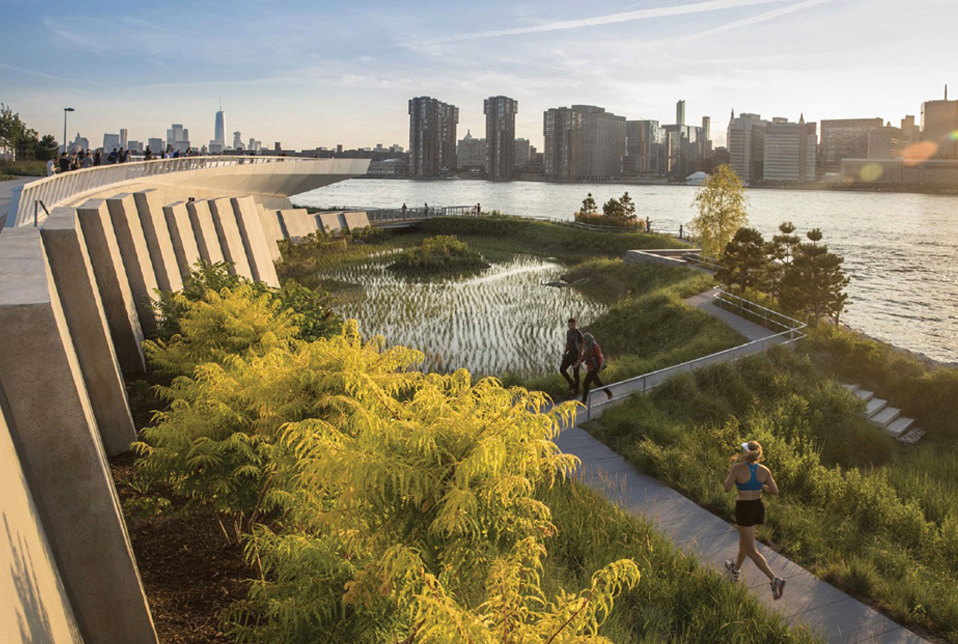 The construction of Phase I in 2013, a collaboration between Thomas Balsley Associates and Weiss/Manfredi with Arup as the prime consultant and infrastructure designer, incorporates active and passive recreation and a broad array of sustainable initiatives, transforming Hunter's Point South into a cultural and ecological paradigm. 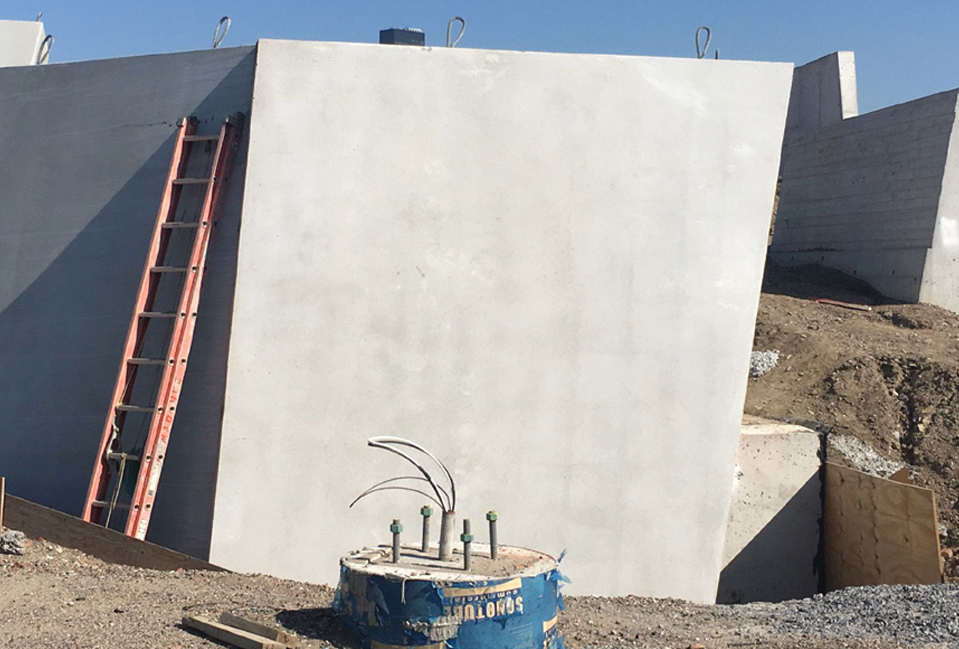 The recently completed 2.2 hectare (5.5 acres) Phase II, by SWA/Balsley and Weiss/Manfredi with Arup as consulting engineers, expands the park south to Newtown Creek and completes the full vision of Hunter's Point South Park: the conversion of nearly 4.45 hectares (11 acres) of abandoned industrial landscape into a continuous waterfront park.

Complementing the active recreation spaces of Phase I, the new Phase II offers places of retreat and connections with nature at the water's edge. Hunter’s Point Park initiated one of New York's most ambitious, complex developments in decades, which also includes 5,000 units of affordable housing, two schools, and an expanded ferry stop.

The park is also a new model for waterfront resilience, with a "soft" approach to protecting the water's edge from rising floodwaters. A continuous meandering causeway, elevated slightly above the river, offers a walk along the river's edge and protects just over half a hectare (1.5 acres) of newly established wetlands.

The design also leverages the site's dramatic topography with a shaded grassy promontory, a new island reached by a pedestrian bridge, a kayak launch, exercise and picnic terraces, a collection of intimate "break-out" lounges off the pathways, and a dramatic cantilevered overlook that hovers above the wetland and offers panoramic views of the Manhattan skyline.

The design re-establishes the site's former marshland identity and introduces a resilient, multi-layered recreational and cultural destination, bringing the city to the park and the park to the waterfront.

Andreas Hausler is a Senior Architectural Consultant at Weiss/Manfredi Architecture/Landscape/Urbanism in New York.

Precast concrete in the landscape 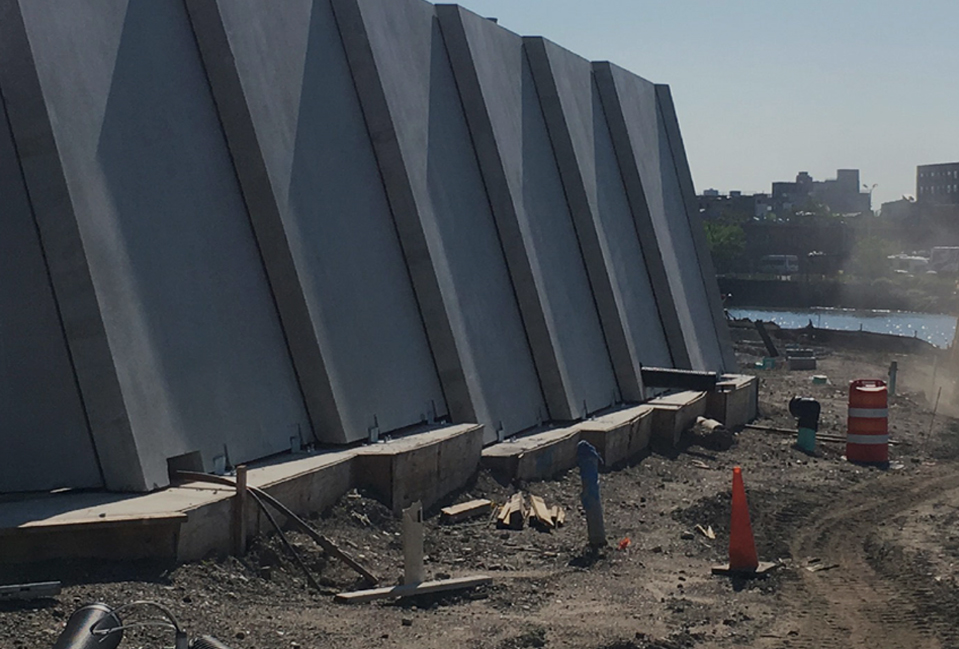 Nearly all of the concrete elements on the project are precast concrete supplied by BPDL in Quebec. Precast concrete was chosen for the quality of finishing that can be achieved, and for the ability to accommodate the many different angles and the ‘assembly of pieces’ effect which was more complicated to achieve than may be apparent. While the manufacturing of the precast concrete components was standard, involving the concrete mixture, pouring, and moulds, the need to have the same finish on all sides of the wall segments added a layer of complexity. 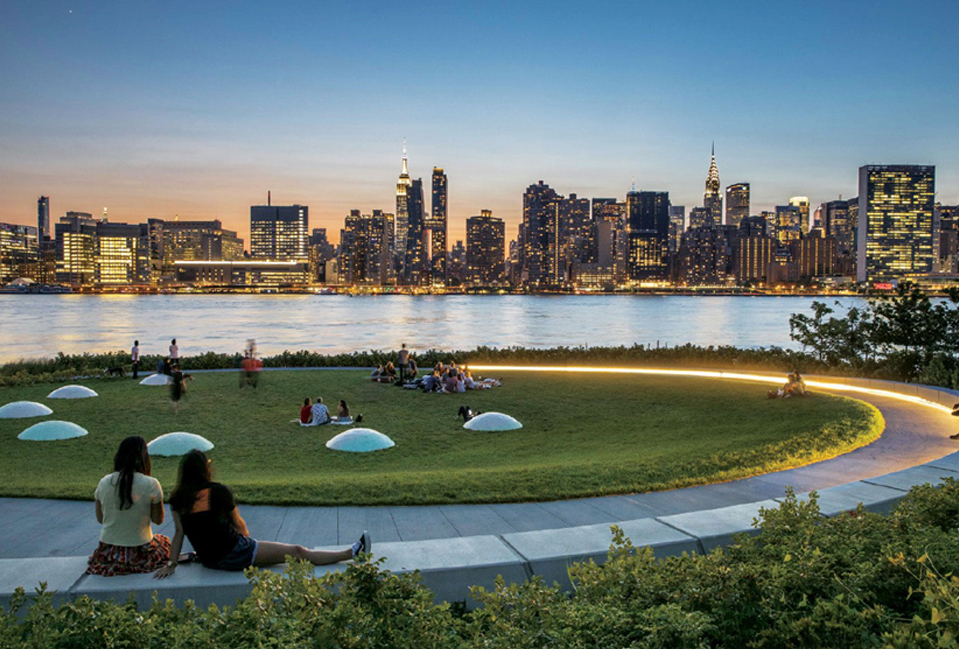