The benefits of a precast spliced girder system are: 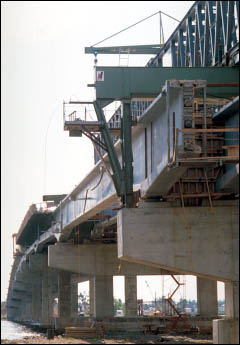 Up until the mid 1960's, transportation equipment and available cranes limited the length of precast pretensioned girders to around 34 m. Some innovative designers began to look for ways to use the economy and high quality of plant produced precast girders for longer span bridges.

Normally, precast girders can be fabricated and transported in lengths of 40 to 50 m and weights of up to 75 to 90 tonnes. The spliced girder method of construction has extended the practical use of precast beams to span lengths of 75 m or more by joining and post-tensioning girder segments at the site. 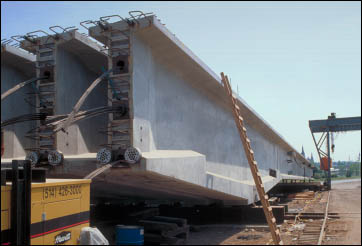 Reinforced splice
Precast girders are cast with splicing reinforcement projecting from the ends. The beams are positioned end-to-end on a temporary support, usually near the dead load inflection point, and concrete is cast-in-place at the splice. The girder segments are usually pretensioned.

Stitched splice
This splice is a compromise between reinforced and post-tensioned splices. The ends of pretensioned segments are clamped together by short cables or threaded bars.

Drop-in splice
This splice is used when the erection of a temporary support is not feasible (e.g. over river crossings or traffic lanes). The splice may be designed as a hinge or post-tensioning may be applied locally to induce continuity.

Structural steel splice
Steel plates are cast in the ends of girder segments to overlap at the matching ends of precast units. The plates are bolted together temporarily while free standing without support. The joints are later welded together and encased in concrete.

Epoxy-filled post-tensioned splice
Girders are aligned end to end, either in their final position or on the ground. The gap is filled with epoxy gel or grout and later the post-tensioning force is applied. A compressible gasket often protects the post-tensioning duct splice area. Match casting, while not essential, allows precision placement and expedites the work.

Spliced I-Girders
The Ontario Department of Highways introduced a new 2300-mm deep I-girder section of the construction of the Hamilton Entrance Bridges. Owner and Designer: Ministry of Transportation of Ontario. Contractor: Steed & Evans. These twin bridges, built in 1972, had end spans of 27.5 m and 3 main spans of 42.7 m. A keyed liquid epoxy filled splice was used to join the girders which were assembled and post-tensioned at the site. The finished girders were installed using a launching truss.

A voluntary alternate accepted for the construction of the 5 span Cockshutt Bridge, built in 1976 near Brantford, ON, resulted in the number of CPCI 2300 I-girder splices being reduced from 48 to 18. Owner: City of Brantford & Brantford Suburban Roads Commission. Engineer: McCormick Rankin & Associates. Contractor: Dufferin Construction Co. An innovative precision bulkhead casting technique allowed the girders to be partially pretensioned for handling, shipping and construction loads prior to the final post-tensioning. The girder segments were erected with cranes directly on temporary steel bents. Twelve pretensioned end span girders 38 m long were successfully shipped 200 km from the precast plant to the site using multi axle steerable truck trailers. The spans were 38 m - 45 m - 49 m - 45 m - 38 m.

Spliced girder bridges have been constructed all across Canada with very good results. They allow the use of quality factory-made components for spans much longer than those that can be transported as single spans.

Contact your local CPCI members to discuss your next project.